A Pierce County man has the latest case of the measles in Western Washington -- possibly exposing several locations in Pierce and King counties to the highly-contagious virus.

According to the Tacoma-Pierce County Health Department and Public Health -- Seattle & King County, the man, in his 40s, spent time at the locations while still contagious.

He was not hospitalized and is currently recovering at home.

It's unclear where he contracted the virus, and health officials said he was not exposed to the most recent measles case in King County.

Most people in Western Washington are immune to the virus after receiving the MMR vaccine. However, for those who haven't been vaccinated, there are some steps recommended by medical professionals.

“Measles is a cause for serious concern for anyone who does not have immunity,” said Anthony L-T Chen, MD, MPH, Director of Health, Tacoma-Pierce County Health Department. “We urge those people to determine if they were at any of the locations where they may have been exposed to measles." 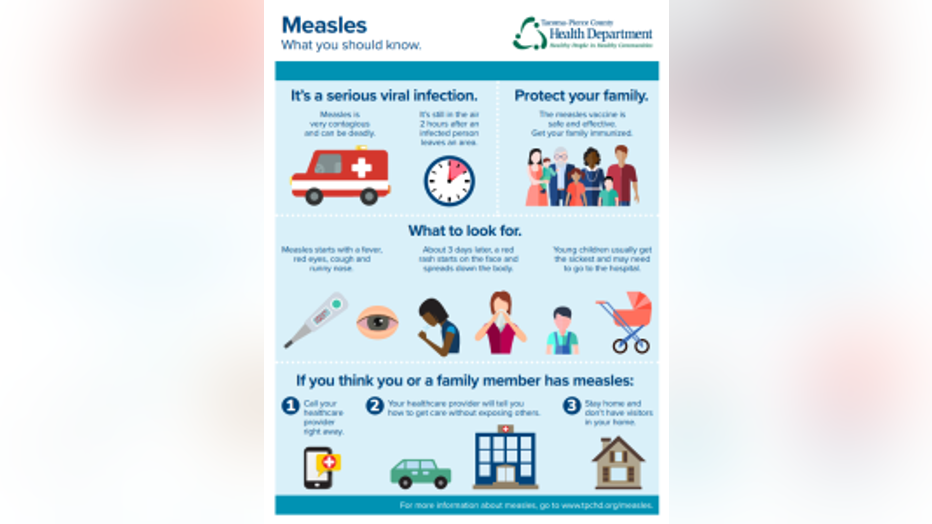 "Children and adults who are up-to-date with their measles, mumps and rubella (MMR) vaccinations are very well protected and not considered at risk, even at places of possible exposure to measles,” Chen said.

If you develop an illness with fever and/or unexplained rash between May 13 to 31, you're asked to call a healthcare provider as soon as possible. Health department officials say it's important to call first to avoid possibly spreading the measles to others.

Locations of potential exposure to measles in Pierce and King County: