The trifecta of natural threats forced stressed out residents to evacuate and prompted the closure of parks and college campuses on Friday.

Multiple new vents, from which lava is spurting out of the ground, formed in the same residential neighborhood where molten rock first emerged Thursday. At midday, a magnitude 6.9 earthquake struck — the biggest of hundreds of quakes this week and the largest to strike the state in 43 years. Residents were also warned to watch out for dangerous levels of sulfuric gas. 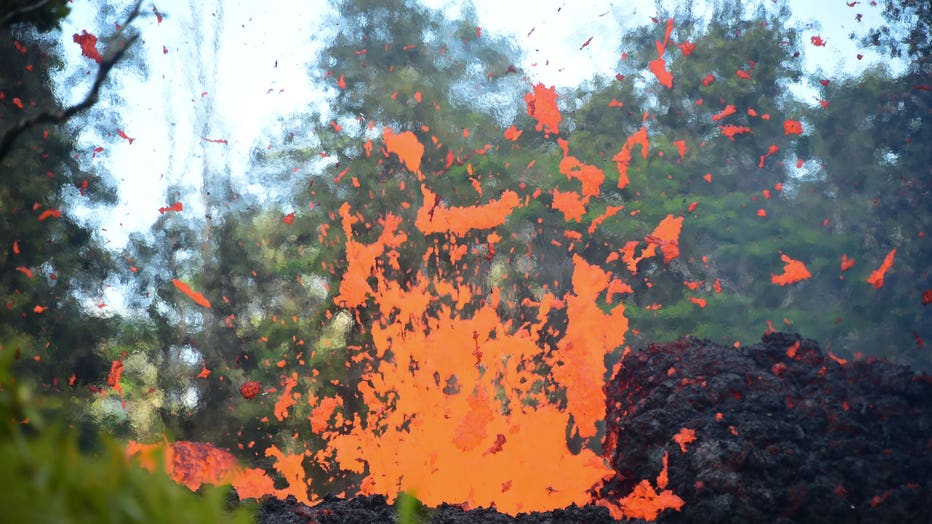 "The magma moving down the rift zones, it causes stress on the south flank of the volcano," Babb said. "We're just getting a series of earthquakes."

She said scientists were studying whether the quakes would affect the eruption.

The lava lake at Kilauea's summit crater dropped significantly, suggesting the magma was moving eastward toward Puna, a mostly rural district of forests, papaya farms and lava fields left by past eruptions.

Officials ordered more than 1,700 people out of Big Island communities near the lava, warning of the dangers of spattering hot rock and high levels of sulfuric gas that could threaten the elderly and people with breathing problems. Two homes have burned. 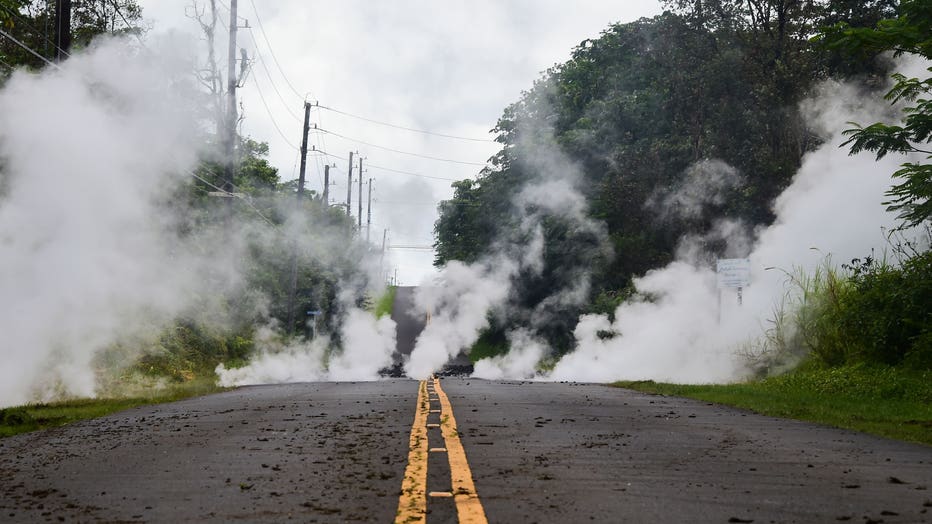 Julie Woolsey evacuated her home late Thursday as a volcanic vent, or an opening in the Earth's surface where lava emerges, sprouted up on her street in the Leilani Estates neighborhood.

Lava was about 1,000 yards from her home, which Woolsey built on a lot purchased for $35,000 11 years ago after living on Maui became too expensive.

"We knew we were building on an active volcano," she said, but added that she thought the danger from lava was a remote possibility.

She said she thought it was remote even days ago when she began packing and preparing to evacuate.

"You can't really predict what Pele is going to do," Woolsey said, referring to the Hawaiian volcano goddess. "It's hard to keep up. We're hoping our house doesn't burn down."

State Sen. Russell Ruderman said he's experienced many earthquakes, but the magnitude-5.4 temblor that hit first "scared the heck out of me." Merchandise fell off the shelves in a natural food store he owns.

When the larger quake followed, he said he felt strong shaking in Hilo, the island's largest city that is roughly 45 minutes from the rural Puna area.

"We're all rattled right now," he said. "It's one thing after another. It's feeling kind of stressful out here." 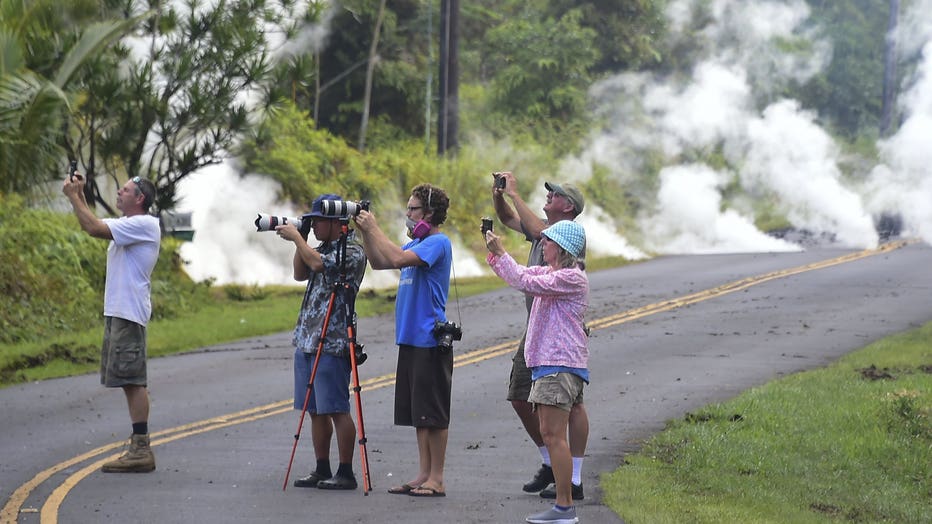 Hawaii Electric Light said the jolt knocked out power to about 14,400 customers, but electricity was restored about two hours later.

Hawaii Volcanoes National Park evacuated all visitors and non-emergency staff. The quakes triggered rock slides on park trails and crater walls. Narrow fissures appeared on the ground at a building overlooking the crater at Kilauea's summit.

The University of Hawaii at Hilo and Hawaii Community College both closed campuses to allow students and employees to "attend to personal business and priorities."

Authorities already had closed a long stretch of Highway 130, one of the main arteries through Puna, because of the threat of sulfuric gas.

At Leilani Estates, where lava was pushing through cracks in the earth, some residents still wanted to get home.

Brad Stanfill said the lava was more than 3 miles (5 kilometers) from his house but he was not allowed in because of a mandatory evacuation order. He was frustrated because he wanted to feed his rabbits and dogs and check on his property.

One woman angrily told police guarding Leilani Estates that she was going in and they couldn't arrest her. She stormed past police unopposed.

Leilani Estates has about 1,700 residents and 770 homes. A nearby neighborhood, Lanipuna Gardens, which has a few dozen people, also has been evacuated.

Kilauea has been continuously erupting since 1983 and is one of five volcanoes that make up the Big Island. Activity picked up earlier this week, indicating a possible new lava outbreak. 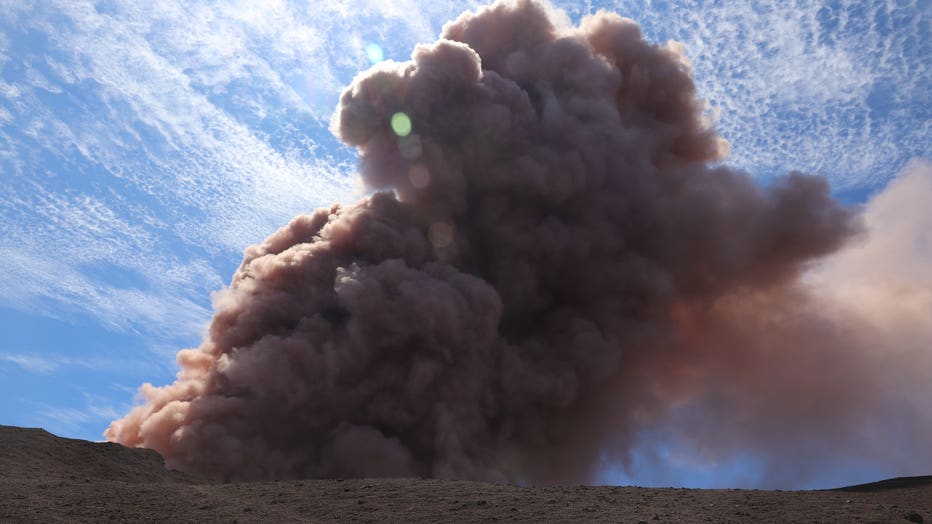 HAWAII VOLCANOES NATIONAL PARK, HI - MAY 3: In this handout photo provided by the U.S. Geological Survey, ash sprews from the Puu Oo crater on Hawaii's Kilauea volcano on May 3, 2018 in Hawaii Volcanoes National Park. The governor of Hawaii has decla

The crater floor began to collapse Monday, triggering earthquakes and pushing the lava into new underground chambers. The collapse caused magma to push more than 10 miles (16 kilometers) downslope toward the populated southeast coastline.

Residents have faced lava threats before.

In 2014, lava burned a house and destroyed a cemetery near the town of Pahoa. Residents were worried it would cover the town's main road and cut off the community from the rest of the island, but the molten rock stalled.

From 1990 through 1991, lava slowly overtook the town of Kalapana, burning homes and covering roads and gardens.

Kilauea hasn't been the kind of volcano that shoots lava from its summit into the sky, causing widespread destruction. It tends to ooze lava from fissures in its sides, which often gives residents at least a few hours' warning before it reaches their property.