With Gov. Neil Abercrombie expected to sign a same-sex marriage bill as early as Wednesday morning, Hawaii is poised to become the 15th state to legalize gay weddings.

SB 1 has been awaiting Abercrombie's signature since the Hawaii Senate passed the bill Tuesday afternoon in a 19-4 vote. If he gives the bill his OK, couples would be able to marry as soon as Dec. 2. 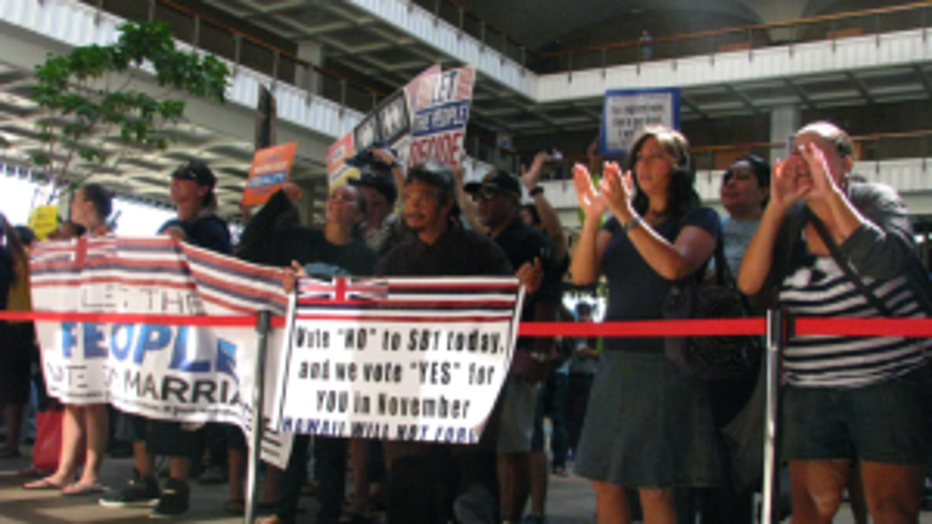 Hundreds of people gathered outside the state House on November 6, 2013, to demand lawmakers let the people vote on the legalization of gay marriage. (Photo credit: Mel Ah Ching/Hawaii Reporter.com)

The legislation in the Aloha State is just the latest in a recent flurry of activity regarding same-sex marriage rights. The Illinois Legislature passed a same-sex marriage bill last week, though Illinois Gov. Pat Quinn has said he will not sign his state’s bill until Nov. 20.

Illinois and Hawaii will bring the total number of states permitting gay marriage to 16. The District of Columbia also permits same-sex couples to wed.

"By giving loving gay and lesbian couples the right to marry if they choose, Hawaii exemplifies the values we hold dear as a nation," President Obama, a native of Hawaii, said in a statement after the vote. "I've always been proud to have been born in Hawaii, and today's vote makes me even prouder."

“I look forward to signing this significant piece of legislation, which provides marriage equity and fully recognizes and protects religious freedoms,” he said in a statement after the Senate vote.

The House passed the bill 30-19 Friday night after a session that lasted nearly 12 hours. The bill, which had initially passed the Senate late last month, returned to accommodate changes made in the House.

Abercrombie noted the more than 50 hours of public testimony from thousands of citizens on both sides of the issue during the debate in the House, which he said resulted in "this significant bill, which directly creates a balance between marriage equity for same-sex couples and protects our 1st Amendment freedoms for religious organizations.”

The Honolulu Capitol rotunda has been filled with both supporters and detractors of the bill. When the House passed the measure in the late hours of the night, both cheers and chants of “Let the people vote!” broke out.

Opponents cite a 1998 constitutional amendment that they claim prohibits the Legislature from allowing same-sex marriage. Supporters of the bill believe that the amendment gave the legislature

the power to ban same-sex marriage, but did not declare an outright prohibition.

In anticipation of the bill's passage, opponents of the law went to court to seek a temporary restraining order to block Abercrombie from signing any such measure, but Hawaii Circuit Court Judge Karl Sakamoto ruled Thursday that the action would be premature.

The judge has said he is willing to hear the case at a later date, and attorney Jack Dwyer said the group will seek an order to prevent any government official from issuing a marriage license until the question of the law's constitutionality is decided.

Atty. Gen. David Louie has said he believes the Legislature had the authority to approve same-sex marriage regardless of the amendment.

The U.S. Supreme Court’s decision in June to void a key section of the 1996 Defense of Marriage Act that denied federal benefits to gay and lesbian couples who were married under state law has opened the door to a number of lawsuits and new legislation on the issue.

In Idaho on Friday, four couples filed a lawsuit in U.S. District Court seeking a similar right. The lawsuit covers those who were married elsewhere and want their nuptials to be legally recognized in Idaho, as well as those seeking to wed within the state.