Kamala Harris on border visit: Want to stop immigration at "root cause"

Vice President Kamala Harris says she will visit the southern border amid the immigration crisis while answering questions from reporters in Mexico City. Harris went on to say she wants stop immigration at the root cause during her visits to Guatemala and Mexico.

MEXICO CITY (AP) - Vice President Kamala Harris sought to assure poor and threatened populations of Latin America on Tuesday that the United States has "the capacity to give people a sense of hope" in the region so they can make better lives without fleeing to the U.S. border.

Harris closed her first foreign trip as vice president unapologetic for her decision not to visit the U.S.-Mexico border as part of her mission to address migration to the United States.

Earlier she brushed off questions about her decision not to go to the border as part of her work to address the spike in migration, saying that while it was "legitimate" to be concerned about the situation there, it wouldn’t be addressed with a simple visit. 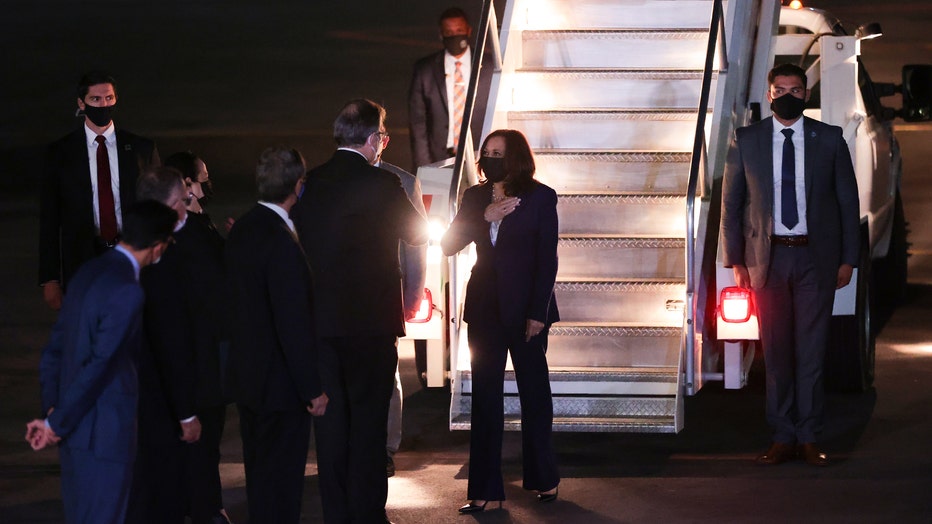 "It must be priority for us to understand why people leave," she told the news conference. "I cannot say it enough. Most people don't want to leave home."

Harris engaged in two days of diplomacy in Guatemala and Mexico as part of the Biden administration's effort to stem the flow of people into the U.S. She met with Guatemala’s and Mexico’s presidents to discuss economic investments and increased enforcement against trafficking, smuggling and corruption.

The increase in migration at the border has become one of the major challenges confronting Biden in the early months of his first term, with Republicans seizing on an issue they see as politically advantageous. Polls suggest Americans are less favorable toward Biden’s approach to immigration than they are toward his policies on the economy and the COVID-19 pandemic.

They’ve tried to make Harris the face of that immigration policy, charging she and Biden are ignoring the issue because both have yet to visit the southern border. Harris told reporters she was focused on "tangible" results "as opposed to grand gestures."

RELATED: Kamala Harris to Guatemalan migrants weighing trek to US: 'Do not come'

Harris and her aides have sought to make clear that her mission was narrowly focused on finding diplomatic solutions to the problem at the border.

Without being asked to judge the result, she told the news conference: "Do I declare this trip a success? Yes I do. It is a success in terms of the pathway that is about progress. We have been successful in making progress."

After her meeting with Mexican President Andrés Manuel López Obrador, the administration announced a range of agreements brokered between the two governments, including a $130 million commitment over the next three years from the U.S. to support labor reforms in Mexico and loans to bolster southern Mexico’s economy.

The administration said the meeting produced an agreement to have an economic dialogue in September on trade, telecommunications and supply chains. And the two countries will also partner on human trafficking and economic programs addressing why people leave El Salvador, Guatemala and Honduras for the U.S.

Harris told López Obrador at the start of their meeting that the two nations are "embarking on a new era" and emphasized the longstanding "interdependence and interconnection" of the two nations.

Harris also met female entrepreneurs and held a roundtable with labor leaders in Mexico before heading back to Washington.

Her brief foray brought her first to Guatemala on Monday. While in Guatemala, she met President Alejandro Giammattei. To coincide with their meeting, the Biden administration announced a number of new commitments to combat trafficking, smuggling, and corruption, as well as investments in economic development in the country.

But some Democrats criticized the vice president Monday when she delivered a direct message to those considering leaving their homes and making the often dangerous trek to the U.S. border: "Do not come."

Her comments echoed those made by past U.S. officials as they've tried to dissuade migrants from seeking to cross the border, as the U.S. faces unprecedented numbers of attempted border crossings. Democratic Rep. Alexandria Ocasio-Cortez of New York called her comments "disappointing" and noted that it is legal to seek asylum.

Harris declined to respond directly to the criticism when reporters asked, saying only: "I’m really clear: we have to deal with the root causes and that is my hope. Period."

But the criticism from both Republicans and Democrats underscored the politically fraught nature of the assignment, and the difficulty Harris faces in finding success with an intractable challenge that's only grown in recent months.

Illegal border crossings have increased steadily since April 2020, after Trump introduced pandemic-related powers to deny migrants the opportunity to seek asylum, but further accelerated under Biden. The new president quickly scrapped many of Trump’s hardline border policies — most notably the program that made asylum-seekers wait in Mexico, often in dangerous conditions, for court dates in U.S. immigration court.

U.S. border authorities encountered nearly 19,000 unaccompanied children in March, the highest on record. Overall, more than 170,000 encounters were reported on the border in April, the highest level in more than 20 years.

The numbers aren’t directly comparable because getting stopped under pandemic-related authorities carries no legal consequences, resulting in many repeat crossings.