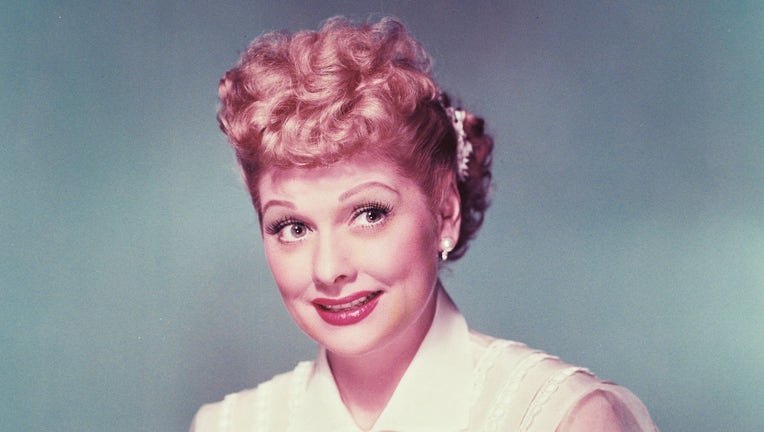 Lucille Ball (1911-1989), US actress and comedian, wearing a white blouse with white chiffon sleeves in a studio portrait, against a grey background, circa 1955. (Photo by Silver Screen Collection/Getty Images)

CHICAGO - It’s time to celebrate an icon. "I Love Lucy" star and groundbreaking television executive Lucille Ball was born on Aug. 6, 1911, making this year the 110th birthday of the late comedy legend.

Ball, who passed away in 1989, enjoyed a long and storied career. Prior to the creation of "I Love Lucy," Ball worked as a model — a profession she adopted after failing to break into New York theatre. Luckily for her (and the rest of the world), she soon caught the attention of Hollywood, leading to a busy career, mostly in "B" movies.

On one such film set, Ball met a Cuban bandleader/actor named Desi Arnaz, and the pair married in 1940. After creating the popular radio show "My Favorite Husband," they formed Desilu Productions and transformed the program into a hugely influential sitcom still watched (and quoted) by comedy fans today. "I Love Lucy," which premiered in 1951 and was inspired by the couple’s life together, was an instant hit.

But though "Lucy" made Lucy an on-screen star, it also made her one of the most powerful and influential people in Hollywood. Desilu Productions gave the greenlight to "Star Trek" and "Mission: Impossible," among other popular series.

With a life like that, there’s nearly always more to discover. Put down the Vitameatavegamin and experience some of the lesser-known titles from Lucy’s career, all streaming for free on Tubi.

Lured (1947): This thriller from Ball’s pre-TV days centers on an American dancer (Ball) living in London who finds herself embroiled in the search for a serial killer who targets lonely women. Boris Karloff also stars.

The Lucy-Desi Milton Berle Special (1959): This episode of "Sunday Showcase" teamed Ball and Arnaz (also the director) with fellow comedy legend Milton Berle for what’s essentially a long episode of "Lucy." When Berle and his bandleader Ricky Ricardo extend an engagement in Vegas, Berle’s wife is upset that he’ll miss their anniversary. Lucy steps in to help him make amends, and of course, hijinks ensue.

Happy Anniversary & Goodbye (1974): We have Ball to thank for one of Arnold Schwarzenegger’s earliest acting roles, in a TV special alongside Ball and Art Carney. "A couple approaching their 25th anniversary look to their respective best friends, an independent thinker and a swinger, for tips to spice things up."

Here’s Lucy (1968): Ball and real-life children Lucie Arnaz and Desi Arnaz, Jr. star together in a sitcom in which "a widowed mother of two teens ... works for her high-stressed brother-in-law’s temp agency"