Specialized units with Seattle Police are working to combat the issue.

SEATTLE - Since Friday, four people have been injured by gun violence across the city of Seattle.

On Sunday night in the Lake City neighborhood, two of those were hurt in a drive-by shooting.

In the last month, 19 people have been injured.

Those statistics are concerning officers and citizens alike as gun violence continues to rise in Seattle.

In a recent incident, renters in the South Lake Union neighborhood found themselves in the crossfire.

"I don’t understand how a place like this would have violence in this type of manner," said Jailen Johnson who works in the area.

On Monday morning, Johnson says his boss shared a warning with him.

"I was told by my job to be careful in the area," he said.

A 23-year-old man made his way to a local hospital where he told doctors he had been shot in an alleyway. A stray bullet also ripped through a nearby apartment building missing the renters.

South Lake Union has transformed into a technology hub, but now gun violence has also found a home.

"Seattle has turned out to be one of those places where you have to watch out and be careful," Johnson said.

In Lake City, two more were shot late Sunday. The incident ended with a car crashing through the fence at Larry Wall’s property on 31st Avenue North. The shooting capped a fifth day in a row gun violence ripped through Seattle.

Between April 17 until May 17, Seattle police say 19 people have been injured or killed by gunfire. The violence has touched nearly every major neighborhood across the city. Since the beginning of the year, SPD has investigated more than 100 reports of gunfire injuring 35 people and killing seven. 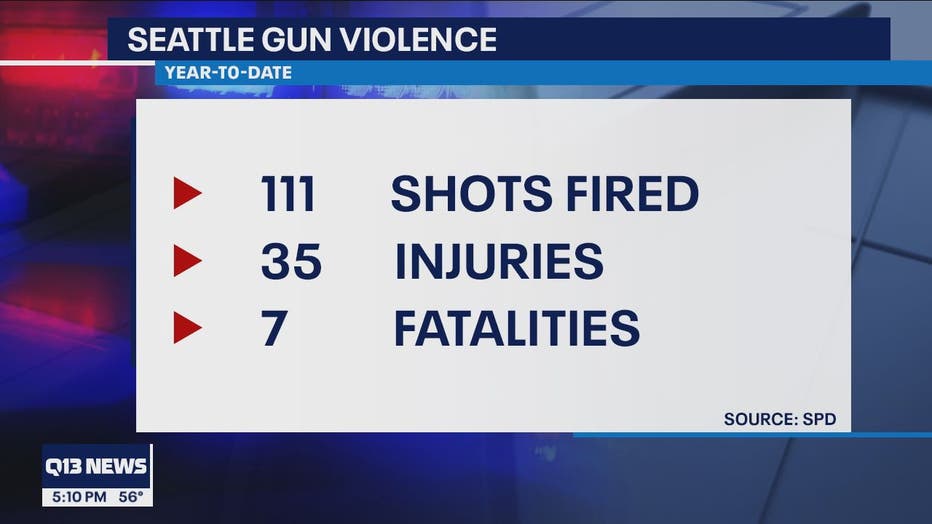 The numbers are running high and the department’s gun violence unit is working to push those numbers down. Neighbors worry the crossfire leaves everyone in danger.