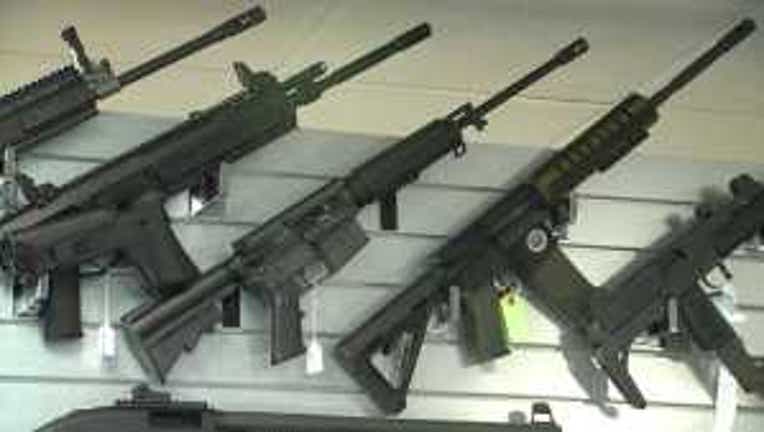 SEATTLE -- It's not just a big increase in gun sales in this state -- it's enormous.

One Bellevue gun store is seeing  a 1,000% spike in gun sales since the Newtown, Conn., killings at the elementary school. It's the AR-15 primarily used in that shooting that is now fueling sales.

Wade’s Eastside Gun had no shortage months ago; now the shelves are bare.

Semiautomatic weapons, specifically the AR-15s, which are the civilian versions of the military's M-16 assault rifle, are on many people's Christmas lists as the pressure mounts in Washington, D.C., to ban assault weapons.

“Our distributors are sold out, our manufacturers have kind of been caught with their pants down,” said Gaughran.

Nationwide, many Walmart branches are also sold out of these military-style rifles and a gun store in Charlotte, N.C., raked in more than $1 million in sales in just one day.

“Stocking up when I can and I am standing up for my Second Amendment rights,” said Wade’s Eastside Gun customer Paulson James.

If you ask the Second Amendment Foundation they are already under attack. Phil Watson said his group is dodging death threats and complaints from gun opponents using the Newtown tragedy as ammunition.

“We are open to a meaningful discussion about how to keep dangerous firearms away," Watson said, adding that the focus should be on mental health and not gun control.

In the meantime, the anti-gun sentiment reaches a fever pitch.

“The Second Amendment doesn’t give us the right to bear every single weapon that we know of,” said Sen. Dianne Feinstein, D-Calif.

Feinstein is vowing to ban assault weapons and close the gun show loophole, with President Obama on her side.

“There is a danger to society but there is no preventing it whatsoever; there is always going to be crazy people out there. If you take guns, there is going to use something else to hurt people,” James said.

“There are so many millions of these guns floating around if some nutter wanted to get his hands on it he is going to get one of these,” said Gaughran.

Gaughran added that  once he is sold out of the AR-15, it could take months to restock because the manufacturers cannot make it fast enough and distributors are having to ration them out to all their different dealers.