Homeowners from a number of communities including Puyallup, Pacific and Auburn woke up Saturday morning to carnage – some had pumpkins smashed, but others took on much more damage.

PUYALLUP, Wash. - A number of Pierce County homeowners are trying to figure out why a group of teens went on a spree late Friday, early Saturday morning destroying pumpkins, homes and Halloween decorations.

Homeowners from a number of communities including Puyallup, Pacific and Auburn woke up Saturday morning to carnage – some had pumpkins smashed, but others took on much more damage. 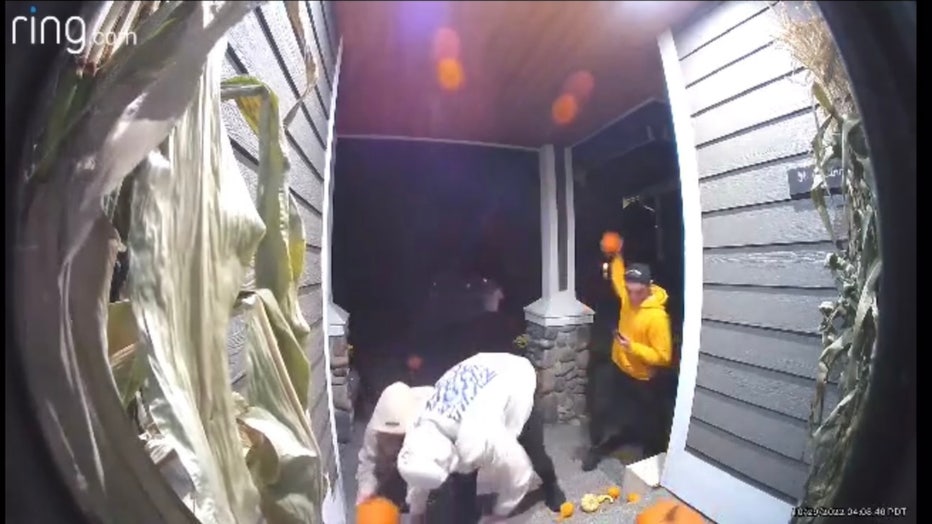 Five people converge on a home in Puyallup smashing pumpkins, one of the individuals eventually throws a large pumpkin through a window shattering the glass and waking up the family inside.

Jordan Guinn woke up to glass shattering, the result of a vandal tossing a pumpkin through her front window. A second person – who appears to be a teenager – picks up three smaller pumpkins and attempts to throw them through a second window before running off with a group of four other people.

"It sounded like someone was kicking down our front door," said Guinn.

Guinn said the pumpkins weren’t her concern. She was frustrated at how the situation played out for her two young daughters. One came down the stairs crying, the other hid in the attic – when they heard the shattered glass they mistook it for gunshots.

"I’m fine with kids doing dumb, young kid, things," said Guinn as she stood next to her shattered window. "That’s typical – to take it to another level, that’s the issue."

In Pacific a second homeowners named Amanda, told FOX 13 News that she thinks the same teens hit her home. 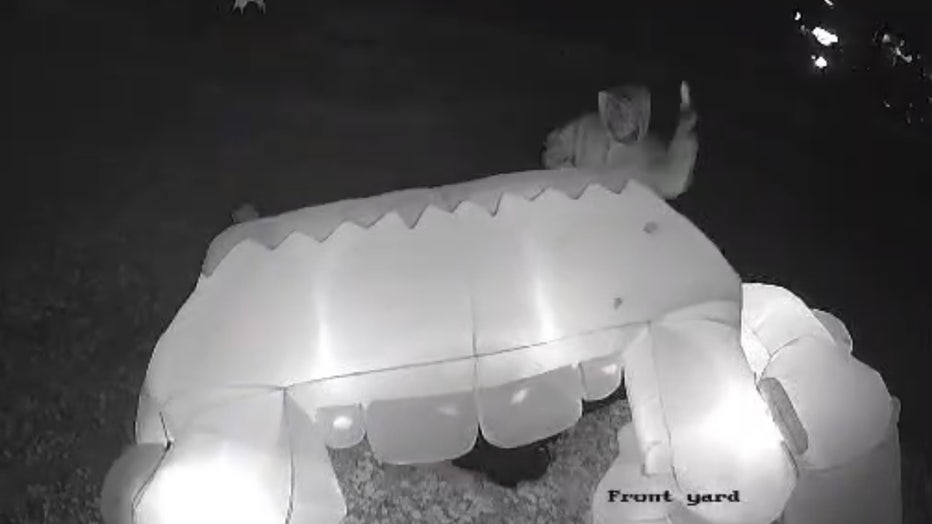 A person holding a knife is caught on camera slicing into more than a half-dozen inflatables at a home in Pacific, WA.

Every year she has music and a bunch of inflatable Halloween decorations that kids come from around the neighborhood to see. Her surveillance video captured a person quickly coming into frame and swinging a knife before the decorations deflate.

"The did it quick, but they did it efficiently," she said. "They threw a pumpkin at a guys’ vehicle. Everyone has videos, it’s the same people."

FOX 13 News has reached out to a number of police departments in the corresponding communities to figure out whether they believe all the damage comes from the same group of people – it’s unclear how many homes were hit, but close to a dozen people have already connected via Facebook with similar stories.

Guinn said she hopes the individuals responsible are caught – not just because she’s frustrated, but there’s a concern that an overzealous homeowner could retaliate if they catch them in the act.