COUPEVILLE, Wash. -- A geotechnical engineer who was brought in after a landslide on Whidbey Island destroyed one home and forced the evacuation of 34 others told officials Wednesday night that the slide "is still active, the ground is still moving," but that he had narrowed the area at risk.

Because of the narrowing of risk, some of the evacuated residents who lived far from the cliff were going to be allowed to return to their homes Wednesday night.

“Kind of like a nightmare, literally,” homeowner Bret Holmes said.

He said the nightmare began at about 4 a.m. Wednesday with a loud, booming sound.

“It sounded like an earthquake, and I heard something really loud and I looked out the master bedroom and noticed that about 20 tall trees were gone,” he said.

His view of Admiralty Bay and the Puget Sound is no longer obscured, but he lost about 75 feet of property and the slide continues toward his house.

“It was pretty scary. I got out there with a flashlight and then just kept hearing a rumbling and watching more and more of it (the land) fall away,” Holmes said.

He wasn’t alone. Behind several homes, the massive slide tore away grass and earth and tossed trees like toothpicks all along a ridge.

“I thought maybe a portion of it was always eroding, but that much of it? No, no. I mean, I lost over 50 percent of my yard,” said neighbor Delia Curt.

Neighbors rushed to the rescue, helping to pack up and carry anything they could grab.

“I just picked and chose what I wanted to take,” Curt said. “Don`t know if I can come back.”

Below the ridge, the slide took out a home and a road, cutting off some neighbors who had to be rescued from the sea by boats or on land by ATVs.

Central Whidbey Fire and Rescue Chief Ed Hartin said they’re still not sure what caused such a major slide but a geotechnical engineer for the state Department of Natural Resources came out to test the soil.

"What he told us is the slide is still active, the ground is still moving, but he has narrowed the area at risk slightly, and we're recommending that the homes down on Driftwood remain evacuated this evening. Some of the homes we evacuated on Fircrest (on top of the ridge), the occupants will be able to reoccupy those Wednesday evening,” Hartin said.

Holmes said it certainly doesn`t feel stable around his home. He said he’s not sure he`ll return. And if he doesn't, he said, he`ll miss the place that`s been in his family for three generations.

“Yeah, the first  house built here, and it would be a shame to see it go,” he said.

Holmes, like others here, got other bad news. His home isn’t insured for this, as it falls under the same exception for earthquakes or land movement included in most home insurance policies.

"There is a lot of really lost hope. I mean all these people have put their heart and their soul into this neighborhood and their homes, so I just think it's going to be really tough,” landslide victim Teresa Levack Norgaard said. 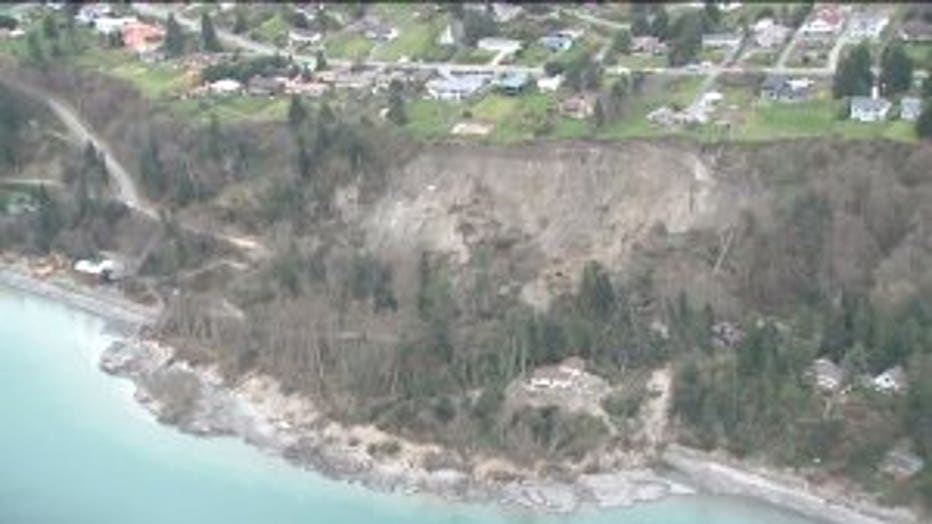