A grizzly bear pulled a woman from her tent in the middle of the night Tuesday in Montana and killed her, according to wildlife officials.

The victim, Leah Davis Lokan, 65, of Chico, California, was on a long-distance bicycling trip when she was attacked in the western Montana community of Ovando, about 60 miles northwest of Helena. She was killed around 3:30 a.m. before fellow campers in an adjacent tent were able to use bear spray to ward off the estimated 400-pound animal.

Montana Fish, Wildlife, and Parks (FWP) officials said the bear had previously stumbled across the site around 3 a.m., where Lokan and a couple were camping near a post office. The bear ran away after waking the three campers, who removed food from their tents, secured it, and went back to bed.

About 15 minutes later, the bear was captured in surveillance footage at a business less than a block away from the post office. Officials added that the bear got into a chicken coop at some point during the night and ate several chickens. 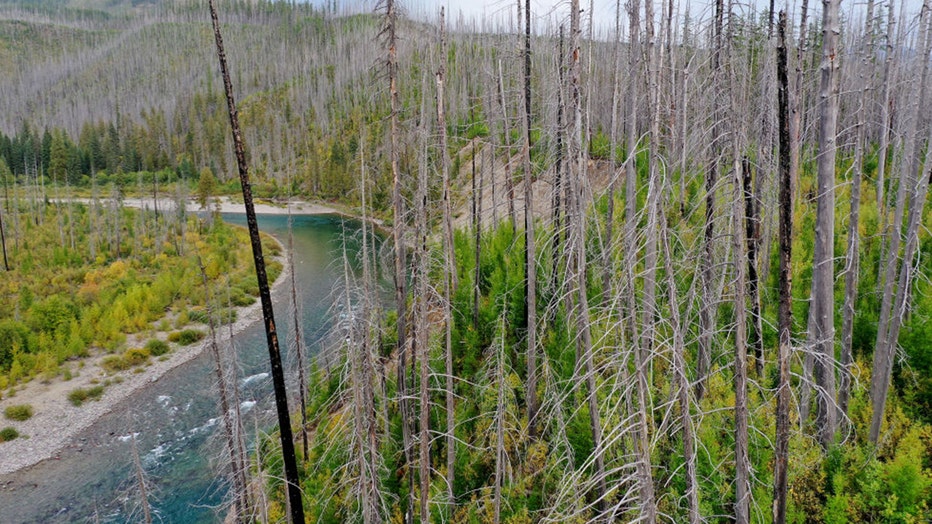 FILE- New pine trees grow up from the forest floor along the North Fork of the Flathead River on the western boundary of Glacier National Park Sept. 16, 2019 near West Glacier, Montana.

The bear has not been located and will be killed.

FWP wardens and bear specialists will continue to monitor the area closely, and efforts to find the bear are now focusing on traps near Ovando, they added.

"At this point, our best chance for catching this bear will be culvert traps set in the area near the chicken coop where the bear killed and ate several chickens," said Randy Arnold, FWP regional supervisor in Missoula.

Lokan was a registered nurse who worked at a hospital in Chico and had looked forward to the Montana bike trip for months, said Mary Flowers, a friend of the victim.

"She loved these kinds of adventures. A woman in her 60s, and she's dong this kind of stuff -- she had a passion for life that was out of the ordinary," Flowers said.

DNA from the bear was also collected at the scene of the attack and will be analyzed, wildlife officials said. They added that if the bear is caught in one of the traps, DNA can be "quickly" compared to determine if it was the same animal.

Grizzly bears have run into increasing conflict with humans in the Northern Rockies over the past decade as the federally protected animals expanded into new areas and the number of people living and recreating in the region grew. That has spurred calls from elected officials in Montana and neighboring Wyoming and Idaho to lift protections so the animals could be hunted.

North of Ovando lies an expanse of forests and mountains, including Glacier National Park that stretches to Canada and is home to an estimated 1,000 grizzlies.

Fatal attacks are rare in the region. There have been three in the last 20 years, including Tuesday’s mauling, according to the U.S. Fish and Wildlife Service.

Over the past 20 years, there have been eight fatal maulings of people by grizzlies from a separate population of about 700 bears in and around Yellowstone National Park. In April, a backcountry guide was killed by a grizzly bear while fishing along the park's border in southwestern Montana.

Campsites in Ovando will be closed until Sunday, according to the Powell County Sheriff's Office.