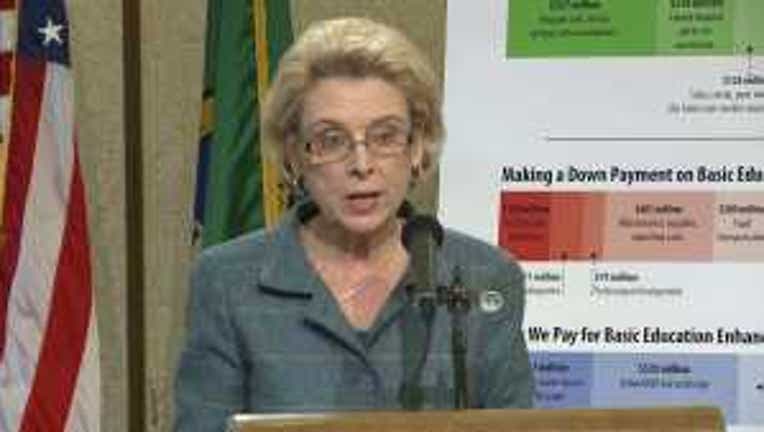 OLYMPIA -- Governor Gregoire issued her final budget for Washington state Tuesday in Olympia, and she leaves office with a call for $1 billion in new revenue for education, something that is required because of a recent state Supreme Court case.

“A budget that relies only on budget cuts does not build the future that I think is right for the people of Washington state,” Gregoire said.

By law, the governor is required to present a spending plan for the next biennium, even though she won’t be around to fight for it. She argues, however, that the new governor and the new legislature will have no choice but to come to the same conclusion she has, and that new money needs to be found.

To generate $1 billion more for education, the governor continues a surcharge on beer, extends a business tax for services, and calls for a new gas tax – to the tune of $387 million -- to pay for student transportation.

“It is our moral responsibility,” she said.

New education spending would include more early learning, more all-day kindergarten, and more evaluations. The budget also called for several hundred million dollars in cuts and efficencies, allowing her to put more money into the environment, transportation, and healthcare.

Many reacted to the budget proposal with enthusiasm.

“Pleased,” was the reaction of Julian Perez M.D. of SeaMar Health Centers. “I was very excited to hear that the Medicaid expansion would be embraced in this proposed budget.”

On the campaign trail, governor-elect Jay Inslee promised to hold the line on new taxes.  On Tuesday, Inslee issued a statement saying he would lay out his own budget priorities when the legislative session starts next month.

“What governor-elect Inslee said, he’s not going to raise taxes,” Hill said. “We’re taking him at his word.”

Hill said expected growth in the state budget should be adequate for fulfilling the supreme court’s education mandate.

“We’ve got $2.1 billion of  new revenue coming into the state,” Hill said. “It’s a matter of how are we gonna spend that and how are we going to prioritize our spending.”

Gregoire denied today that such approach could work.

“We cannot cut our way to funding a billion dollar investment in K-12,” she said.  “We cannot grow out way out in the next biennium to the tune of $1 billion to invest in this.”