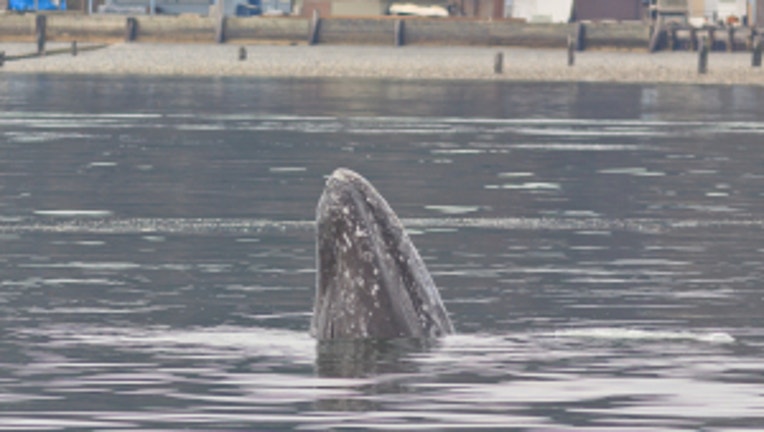 This photo of a gray whale from Capt. Michael Colahan, of Island Adventures Whale Watching, was taken near Everett. You can see these enormous creatures for a few weeks as they feed between the mainland and Whidbey Island.

SEATTLE - Marine mammal biologists and veterinarians are treating and monitoring a gray whale that appears to have developed an infection after being darted with a satellite tracking tag.

The whale is part of a group of about 250 gray whales that feed off the coasts of Oregon, Washington and British Columbia in the summer. The whale is now off the coast of Vancouver Island and appears robust and to be behaving normally, The Seattle Times reported.

But experts became concerned when in March a National Oceanic and Atmospheric Administration (NOAA) Fisheries contractor photographed the whale in Barkley Sound, B.C., and reported a lesion around the tagging site and two lesions on the opposite side of the animal.'

The whale was also coughing up mucus, so the whale was darted with antibiotics on March 31 and April 1 to stave off systemic infection, said Martin Haulena, veterinarian for the Vancouver Aquarium, a member of the response team.

Experts on a media call Tuesday coordinated by NOAA said the animal will continue to be monitored.

Tagging provides information for biologists seeking to understand the movements and population dynamics of animals and in the case of this whale, to additionally understand where those movements overlap with people, such as shipping lanes.

The killer whale is called Chainsaw because his dorsal fin has several large notches in the top third of his fin that gives the appearance of a large saw blade.