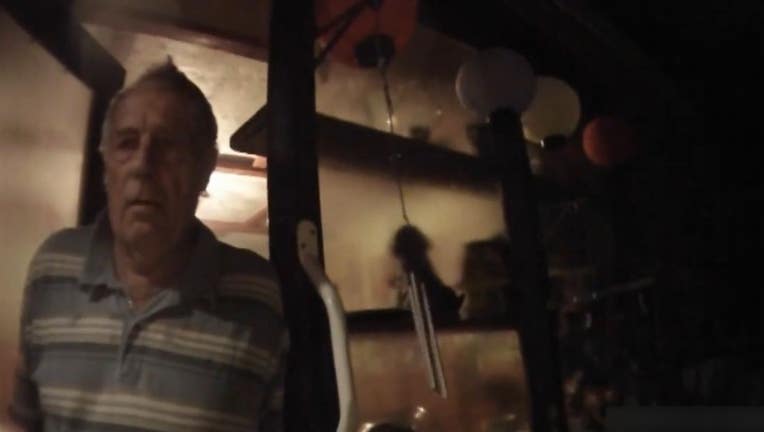 ISLE OF WIGHT, England --  Shocking video of the moments leading up to the arrest of an abusive husband by police has been released with the permission of that man’s wife.

The woman, Gale Marmoy, agreed to share her horrific story and allow the footage to be released in the hope that it would help other victims escape their abusers.

Marmoy believes her life was literally saved the night in October of 2013 when Hampshire Police arrived at the door to investigate after an emergency call was made from the home.

The officers we wearing body cameras and that footage captured the moment the door was opened by Marmoy’s husband, Michael John Gregory.

Gregory, 77, can be seen trying to casually keep the police from entering his home and speaking with his wife.

Officers however persist and that’s when the cameras capture the terrifying footage of Marmoy.

Her face is bruised, beaten, puffy and nearly unrecognizable.

“If it had been a little bit later, they wouldn’t have found me as they did they probably would have found a body,” said Marmoy.

Police arrested Gregory and he is now serving a 10-year prison sentence.

“The last time he was punching me, I thought ‘this is it’, you’re going to die tonight. I was thinking of my children, my grandchildren. He just meant to do me harm, which he did, but I didn’t realise how much harm, I was terrified,” said Marmoy.

Marmoy’s story could have ended there, but she agreed to the release of the footage and to tell her story in the hope that she might help someone else escape abuse before it’s too late.

“You’ve got a life, and you deserve that life. These people make you feel worthless, completely useless; that’s not true. They deserve the punishment, you don’t, but until you tell someone, or say it’s ‘got to stop’, it will carry on. Do what you’ve got to do, but do it sooner than I did it.”

WARNING:  VIDEO BELOW IS GRAPHIC AND DISTRUBING