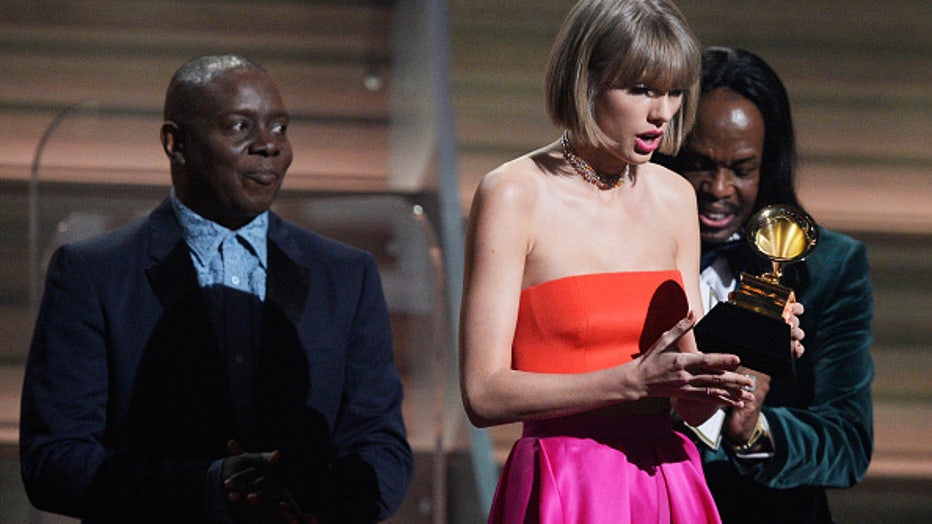 Singer Taylor Swift (C) accepts the Album of the Year award for "1989" onstage from musicians Philip Bailey (L) and Verdine White of Earth, Wind & Fire during The 58th GRAMMY Awards at Staples Center on February 15, 2016 in Los Angeles, Californi

LOS ANGELES (AP) -- Taylor Swift's official switch from country to pop with her multi-hit, best-selling "1989" album brought the singer her second Grammy Award win for album of the year.

Swift was shocked when she won the night's top prize, beating out Kendrick Lamar, Chris Stapleton, Alabama Shakes and the Weeknd. Swift used her speech to encourage young women who feel defeated at times or discouraged by others.

"There are going to people out there that try to undercut your success or take credit for your fame ... you don't let those people sidetrack (you)," she said.

Swift won Grammy album of the year for "Fearless" in 2009. She won three awards Monday, including best pop vocal album and best music video for "Bad Blood," at the Staples Center in Los Angeles.

He won best rap album for "To Pimp a Butterfly" as well as rap performance, rap song, rap/sung performance and music video. Along with his wins, Lamar also had a show-stopping moment when he took the stage.

He started as he appeared beaten, in handcuffs, with chains around his hands and a bruise on his eyes. He went on to fuse rap, jazz, reggae and African sounds for a commanding performance as he rapped "The Blacker the Berry" and the Grammy-nominated "Alright" passionately. He ended with a map of Africa, and the city of Compton imprinted in it.

"Hip-hop, Ice Cube, this for hip-hop, this for Snoop Dogg ...this for Nas. We will live forever, believe that," said Lamar onstage when he won best rap album.

Mark Ronson and Bruno Mars won two awards for "Uptown Funk," including record of the year. Ronson gave a shout-out to Prince, James Brown and George Clinton for being leaders in funk.

"This is dedicated to the fans right here," Mars added.

Mars introduced Adele, who sang "All I Ask," which they wrote together for her new album "25." She was accompanied with a piano behind her, but the audio sounded off and appeared to throw off her performance.

"There was a brief 5-8 second technical issue that was out of our control," a CBS spokesperson said.

Justin Bieber started "Love Yourself" on guitar in good form, but ended with a vocal struggle. Little Big Town and Demi Lovato, however, had shining moments during their performances, hitting impressive and smooth high notes.

But Bieber also had a shining moment: He won his first Grammy on Monday night for best dance recording for "Where Are U Now" with Skrillex and Diplo.

The Grammys also marked first-time wins for Alabama Shakes, the Weeknd, Stapleton, Pitbull and Ed Sheeran, who won song of the year for "Thinking out Loud."

"We wrote it on a couch in my house," he said of his hit song he wrote with Amy Wadge, which also won him best pop solo performance.

"My heart is beating a mile a minute," said frontwoman Brittany Howard. "I promise we're going to keep going."

The Weeknd, who won two awards, performed in a cube that was brightly lit for "Can't Feel My Face" until he switched to piano-tinged version of his upbeat hit "In the Night." Stapleton, who has written for dozens of country acts, won best country album for "Traveller."

"This is something you never ever dream of so I'm super grateful for it," he said.

Stapleton walked in with four nominations, including album of the year, but lost best country song to "Girl Crush."

The night featured touching tributes: Lady Gaga was in David Bowie-inspired makeup and gear as she ran through 10 of the icon's hits, including "Space Oddity," ''Changes," ''Fame," ''Let's Dance" and "Heroes."

B.B. King was remembered with a rousing performance by Chris Stapleton, Gary Clark. Jr and Bonnie Raitt - all on guitar and vocals - with "The Thrill Is Gone."

The Hollywood Vampires, a supergroup of Johnny Deep, Alice Cooper and Joe Perry, performed in their first televised performance and honored Motorhead's Lemmy Kilmister. Stevie Wonder, joined with Grammy-winning a capella group Pentatonix, sang "That's the Way of the World" in honor of Earth, Wind & Fire's Maurice White, while members of the Eagles and Jackson Browne sang "Take It Easy" for Glenn Frey at the Staples Center.

Collaborative performances were one of the themes of the Grammys: Carrie Underwood sang with Sam Hunt; Ellie Goulding and Andra Day performed; and while Lovato, Legend, Luke Bryan and Tyrese sang with Lionel Richie to honor the icon.

Rihanna, who was supposed to perform near the top of the show, couldn't due to doctor's orders.

"Rihanna's doctor put her on vocal rest for 48 hours because she was at risk of hemorrhaging her vocal chords," a statement from her representative read.

Swift kicked off the Grammys with performance of her latest hit single, "Out of the Woods,"

Meghan Trainor, who was nominated for two Grammys last year for "All About That Bass," won best new artist.

"Thank you to the Grammys, I love you so much," said a teary-eyed Trainor, who also thanked her parents and Epic Records CEO L.A. Reid.

Other winners include D'Angelo, Kirk Franklin and Jason Isbell.