An investigation of a hate crime is underway after a person tagged a house and slashed car tires at an Asian-American home in Port Orchard.

PORT ORCHARD, Wash. - A West Puget Sound family woke up to find someone had slashed their tires and left red spray paint all over one of their cars and their home earlier this week.

The target of these crimes is a family from the Philippines and now police are looking to see if their race might have been a motivator for the vandal. The family's mother asked for her identity to not be made public for concern of retribution.

"This is so traumatic to us," she said.

The family moved to Kitsap County a few years ago from the Philippines, reaching for the American dream in the Pacific Northwest.

"We were seeking greener pastures here, we’re building a life here," she said.

Port Orchard police acquired the surveillance video and canvassed the neighborhood looking for clues. Investigators say the suspect they are looking for was seen wearing a red hoodie with black pants and standing 5’ 2" to 5’ 6" tall.

"I think it’s important to make your presence known and make folks know they have support," one neighbor told Q13 News.

The woman lives a few homes away from where the vandalism occurred and also asked her identity be concealed. The neighbor said she visited with the family targeted to show support. She also asked to not have her name revealed. 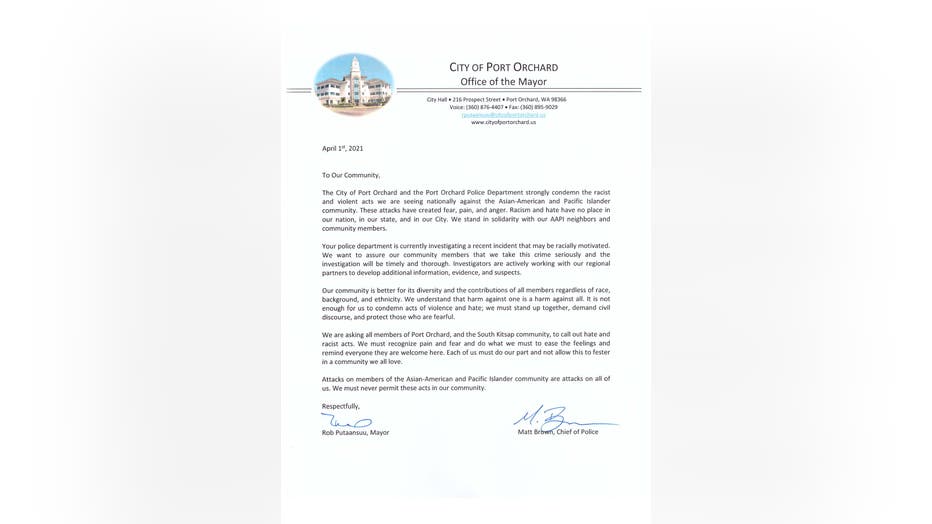 "Nobody deserves this," said the neighbor. "It’s not what we stand for in Port Orchard."

Across this country, Asian Americans and Pacific Islanders have reported a spike in crimes and violence based on their ethnicity. Police in Port Orchard are looking to see if this incident was also racially motivated.

The family has been busy making arrangements to repair the damage and say they don’t know why anyone would target them for any reason.

Anyone who might have information about the incident in Port Orchard is asked to call 911.