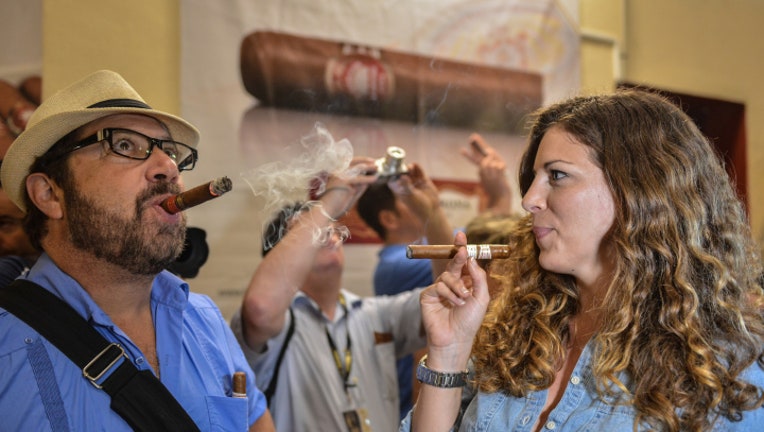 WASHINGTON -- With President Obama announcing major shifts to diplomatic relations with the island nation of Cuba, it's going to get easier to find the one of the country's most renowned exports:

In the changing relations, the "number of steps to significantly increase travel, commerce, and the flow of information to and from Cuba," will increase, diplomatic officials told reporters Wednesday.

American citizens will be also authorized to import additional good from Cuba.

For more on the changing relations, read the full release from the White House below:

Today, the United States is taking historic steps to chart a new course in our relations with Cuba and to further engage and empower the Cuban people. We are separated by 90 miles of water, but brought together through the relationships between the two million Cubans and Americans of Cuban descent that live in the United States, and the 11 million Cubans who share similar hopes for a more positive future for Cuba.

It is clear that decades of U.S. isolation of Cuba have failed to accomplish our enduring objective of promoting the emergence of a democratic, prosperous, and stable Cuba. At times, longstanding U.S. policy towards Cuba has isolated the United States from regional and international partners, constrained our ability to influence outcomes throughout the Western Hemisphere, and impaired the use of the full range of tools available to the United States to promote positive change in Cuba. Though this policy has been rooted in the best of intentions, it has had little effect – today, as in 1961, Cuba is governed by the Castros and the Communist party.

We cannot keep doing the same thing and expect a different result. It does not serve America’s interests, or the Cuban people, to try to push Cuba toward collapse. We know from hard-learned experience that it is better to encourage and support reform than to impose policies that will render a country a failed state. With our actions today, we are calling on Cuba to unleash the potential of 11 million Cubans by ending unnecessary restrictions on their political, social, and economic activities. In that spirit, we should not allow U.S. sanctions to add to the burden of Cuban citizens we seek to help.

Today, we are renewing our leadership in the Americas. We are choosing to cut loose the anchor of the past, because it is entirely necessary to reach a better future – for our national interests, for the American people, and for the Cuban people.

Since taking office in 2009, President Obama has taken steps aimed at supporting the ability of the Cuban people to gain greater control over their own lives and determine their country’s future. Today, the President announced additional measures to end our outdated approach, and to promote more effectively change in Cuba that is consistent with U.S. support for the Cuban people and in line with U.S. national security interests. Major elements of the President’s new approach include: