"It is time for our nation to set a new priority," Inslee told supporters gathered at a solar panel business in Seattle. "This is truly our moment. It is our moment to solve America's most daunting challenge and make it the first, foremost and paramount duty of the United States ... to defeat climate change."

But Inslee says his emphasis on combating climate change sets him apart from his competitors and from Republican President Donald Trump.

"We are all angry and outraged by this president," he said, adding that rather than get drawn into Trump's vortex, he would "unite Americans in this moment to solve our most urgent problem."

What happens to Washington state if Inslee runs for president?

What happens to Washington state if Inslee runs for president?

Inslee frames climate action as an economic opportunity, not just a moral imperative. He didn't talk specifically Friday about the costs of his vision, other than to criticize considerable tax subsidies for the fossil fuel industry. But he argued that public and private investments in clean energy are a net boon for working Americans that would create "millions of jobs," from building "electric cars in Michigan" to installing solar panels on homes in every state.

Inslee says no presidential candidate has hinged a campaign as heavily on climate and environmental policy as he will. He unveiled a blue-and-green campaign logo with an arc of the Earth, eschewing the typical red, white and blue. His Twitter feed Friday was replete with the hashtag #OurClimateMoment.

He plans his first trip as a candidate to Iowa next week, with events geared to climate issues. Trips to Nevada and California will follow.

Inslee may have a larger opening on climate since billionaire environmental activist Tom Steyer has passed on a national campaign, opting instead to continue his advocacy for impeaching and removing Trump from office. Former New York City Mayor Michael Bloomberg, a billionaire who has spent millions of dollars on climate issues, may run.

Steyer tweeted Friday: "It's good to know that a climate champion like @GovInslee will be in the race, pushing the country to recognize what is at stake."

Inslee hasn't specifically endorsed the Green New Deal introduced by New York Rep. Alexandria Ocasio-Cortez and Massachusetts Sen. Ed Markey, and he didn't during his speech Friday. But he said last month that he was "thrilled that this ... resolution has been brought forward" to push for action.

"This is an aspirational document that sets the goal, rather than the policy. It's not meant to be a policy document," he said during an interview after his campaign event. "I will be rolling out my own proposed policy. It will be comprehensive. It will be robust. It will have a sector-by-sector approach which will be targeted to reduction of carbon pollution and job creation."

On the Green Deal, he said, "I think this is fantastic that we have multiple voices now rather than just mine." He called that "something to celebrate." 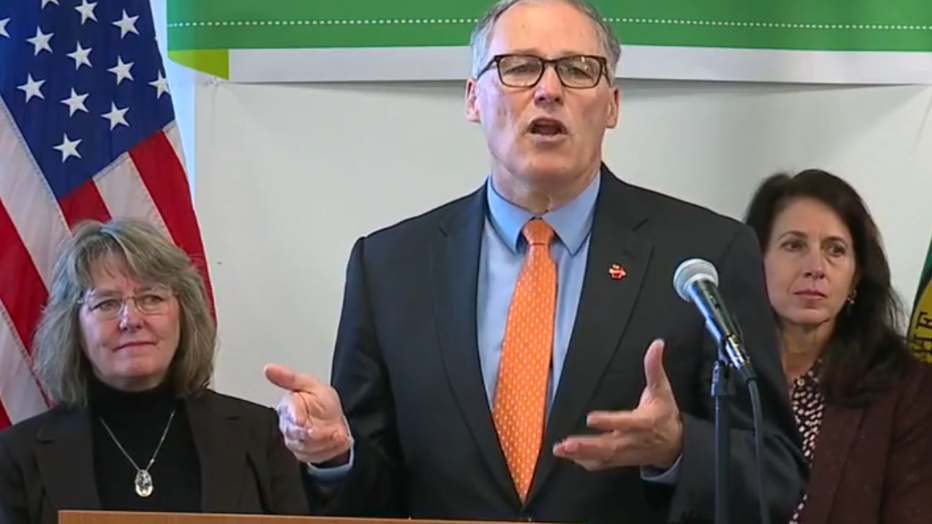 Inslee announced his intention to "power our economy with 100 percent clean energy," but he set no target date for the U.S. to become carbon neutral. The Green New Deal sets a target of 2030.

Despite his emphasis on climate policy, Inslee says he's not a one-issue candidate. He pitches his breadth of personal and political experiences as ideal to bridge political and cultural divides among the Democratic base and the broader electorate.

Inslee has governed Washington state as an unabashed liberal, promoting clean energy, gay rights, abortion rights, environmental preservation, tighter gun restrictions and more spending for education and job training. In Congress, he voted against the U.S. invasion of Iraq in 2003 and for a ban on certain military-style guns.

Most recently, he's called for a state-based public option health insurance plan in Washington that he says is a "step toward universal health care."

The state GOP recently has derided his "extreme environmental agenda" and pointed to its price tag.

Inslee started his legal and political career in small-town central Washington, winning a state legislative post and, for one term, a congressional seat before being knocked out in the GOP sweep of 1994. He returned to Congress representing a metro-Seattle district for 12 years before resigning to run for governor in 2012.

Inslee raised his profile serving as the chairman of the Democratic Governors Association in 2018; Democrats picked up seven governor's offices, and Inslee became a familiar guest to cable news audiences, using the opportunity to lambaste Trump on such issues as immigration and ethics.

"Unlike the man in the White House, I believe in all the people who make up America," he said Friday.

When asked if he would consider declaring a national emergency over climate change, Inslee said he found the current declaration related to the U.S.-Mexico border wall to be "illegal and unconstitutional."

"If the rules change, of course everything will be on the table to figure out how we solve this problem," he said, adding that, at this point, he would not commit to declaring a national emergency on climate.

"The best way to do this is to work with Congress to develop a national consensus about how to build a clean-energy economy," he said.

CNN and The Associated Press contributed to this report.