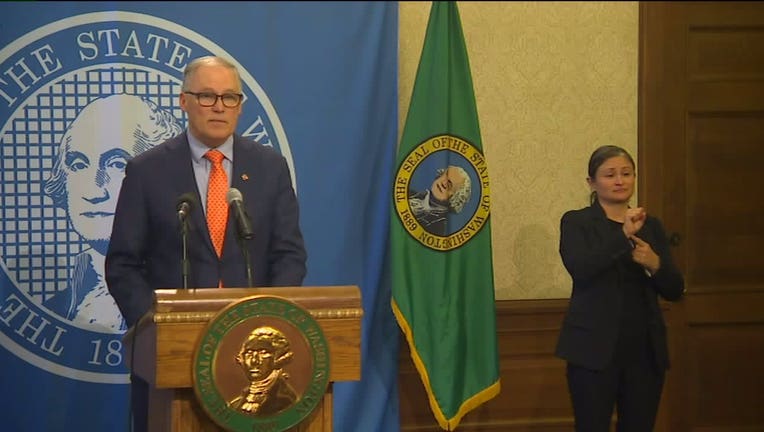 WASHINGTON - Washington Gov. Jay Inslee said Thursday that he wants lawmakers to pass legislation making it a gross misdemeanor for elected officials and candidates to spread lies about election results.

The Democratic governor spoke forcefully against what he called "a continuing coup" on the one-year anniversary of both the Capitol insurrection in Washington, D.C., and a protest where demonstrators breached the gate of the governor’s residence in Olympia.

"And we have to realize, unfortunately, it’s not just in other states; it is right here in Washington state, this ongoing effort," Inslee said at The Associated Press Legislative Preview.

Held by MyPillow CEO Mike Lindell, the event in South Dakota revealed no such evidence of fraud in the November 2020 election, and even some of the experts Lindell had invited said the hacking data that he discussed was nonsensical.

The legislation is still being drafted, and the governor said he is working to find sponsors for the bill to make such lies a gross misdemeanor.

"It should not be legal in the state of Washington for elected officials or candidates for office to willfully lie about these election results," Inslee said.

He later told The Seattle Times that for the gross misdemeanor to kick in, there would have to be "knowledge that there’s potential to create violence."

For that reason, Inslee said he believes it’s constitutional and won’t run afoul of prior state Supreme Court rulings.

In a narrow 5-4 decision in 2007, the court struck down a law barring candidates from deliberately making false statements about their opponents, ruling it violated the First Amendment guarantee of free speech. That ruling came in a case of a candidate who was fined $1,000 by the state Public Disclosure Commission for false claims about a state senator the candidate was challenging.

"You combat bad speech with better speech, not criminal sanctions. Threatening to jail people for political speech is as dangerous to our democracy as questioning election results," he wrote on Twitter.