7 Washington counties can move into Phase 2 on Monday

Restaurant and gym owners are particularly excited to get back into Phase 2.

At Phase 2, restaurants and indoor fitness centers can open at 25% capacity, sports competitions can resume with limited spectators, and wedding and funeral ceremonies can increase their number of guests. 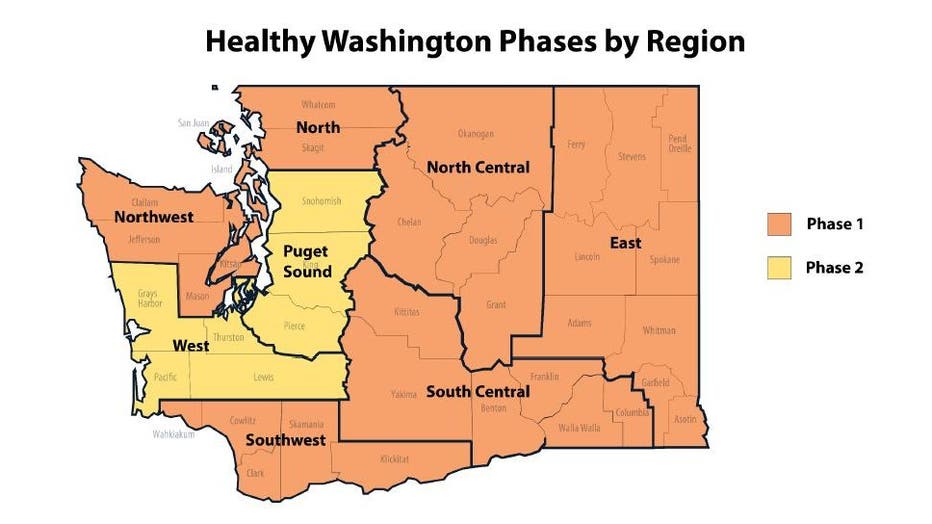 You can find which phase your region is in here.

Inslee first announced the latest iteration of the state’s reopening plan earlier this month, which focuses efforts on reopening regions rather than individual counties.

Before, each region had to meet four metrics in order to advance: a 10% decreasing trend in case rates over a two-week period; a 10% decrease in coronavirus hospital admission rates in that same timeframe; an ICU occupancy rate that’s less than 90%; and a test positivity rate of less than 10%.

Healthy Washington breaks the state down into regions that initially had to meet four metrics to move from Phase 1 to Phase 2. Now, regions will only have to meet three out of four benchmarks to advance:

The requirement to maintain three metrics to remain in Phase 2 remains unchanged. If any region fails to meet any two metrics, they will still regress to Phase 1.

"We are getting closer to finding our way out of this mess, but we aren’t there yet," Inslee said. "We have sacrificed too much to let our frustrations get the best of us now when the finish line is in sight, however distant that may seem in our field of vision."

Beginning next week, for other parts of the state, region metrics will be evaluated every two weeks instead of every week for a determination into moving into Phase 2.

In a statement issued before the governor’s news conference, Republican Sens. John Braun and Jeff Wilson, urged the passage of a bill that would bring the entire state into Phase 2.

"While we are encouraged by the possibility that the governor will reopen more of Washington’s businesses, we need to use science to safely open businesses immediately," they wrote. "This will address the very real crisis our family-owned businesses are suffering.