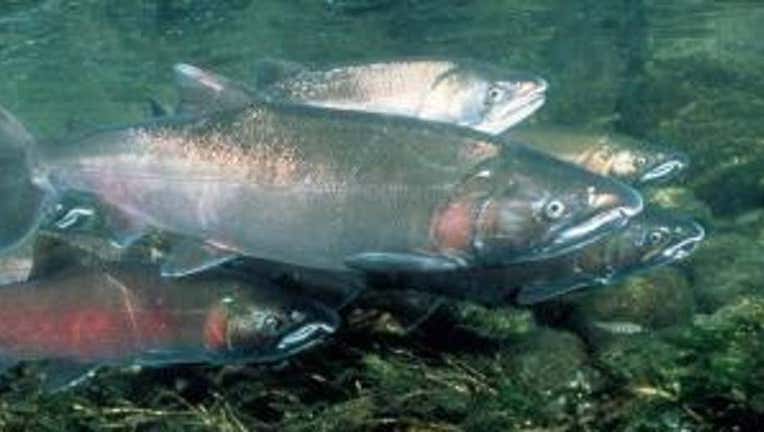 The legislation would set new standards for salmon habitat protection and conservation efforts. The Lorraine Loomis Act was named in honor of the Swinomish tribal elder and salmon advocate who died this summer.

Inslee said the legislation is the result of two years of discussions with tribes in the state.

Salmon are an important resource to Pacific Northwest tribes, many of which through treaty rights are guaranteed the right to fish, hunt and gather.

"Our fight is simple: to be able to practice our culture and feed our spirit with the foods we are accustomed to," Kim Murphy, Loomis’ daughter, said on Tuesday.

Inslee’s proposed investments in salmon recovery include $123 million in new protections for salmon riparian habitat along the banks of rivers and streams and more than $16 million for water quality and temperature improvements.

He also wants to invest $5 million in green infrastructure grants for projects that store water during high flows and release it during low flows, as well as $6.5 million to improve science and monitoring.

Some of the specifics of Inslee’s plan include removing more fish passage barriers, such as culverts, and reintroducing salmon to their historic habitat above areas blocked by barriers such as dams and bridges.

Federal dollars for nationwide salmon recovery are coming to Washington through the recently passed bipartisan infrastructure law, and there could be more in the Build Back Better Act.

"I commend Governor Inslee for his leadership in supporting the Pacific Northwest’s vital salmon populations, and I am going to make sure the federal government is doing its part to recover our iconic salmon runs," U.S. Senator Patty Murray, a Washington Democrat, said in a Tuesday statement.

Salmon populations are struggling. Over 70% of endangered or threatened salmon and steelhead trout populations are "not keeping pace" with recovery goals or are "in crisis," according to the 2020 State of Salmon in Watersheds report. Salmon are losing more habitat than they are gaining, Inslee said.

"We are running out of time," Willy Frank III, chairman of the Nisqually Tribal Council, said at Tuesday’s event. "I think we are past the point of emergency now when it comes to salmon habitat and clean water."

RELATED: Can city soils help save salmon? One new environmental group thinks we can.

READ MORE: Long Live The Kings shows us 'behind the scenes' of their Survive the Sound game