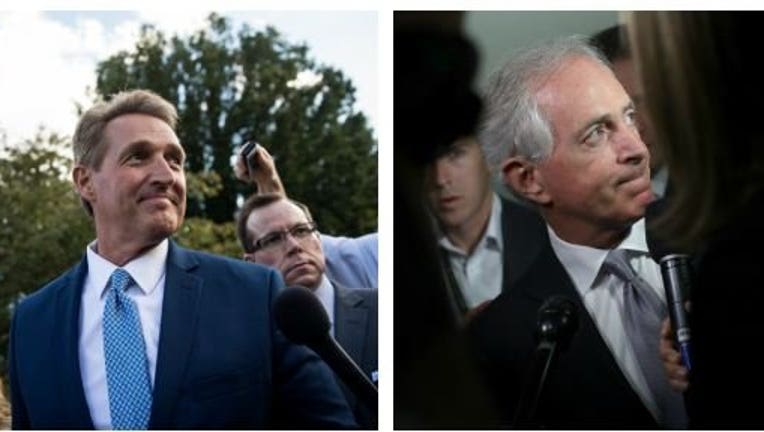 WASHINGTON (AP) — A pair of senators from President Donald Trump's own Republican Party blistered him with criticism Tuesday in a dramatic day of denunciation that laid bare a GOP at war with itself.

Jeff Flake of Arizona declared he would not be "complicit" with Trump and announced his surprise retirement, while Bob Corker of Tennessee declared the president "debases our nation" with constant untruths and name-calling.

Corker, too, is retiring at the end of his term, and the White House shed no tears at the prospect of the two GOP senators' departures. A former adviser to Steve Bannon, Trump's ex-strategic adviser, called it all "a monumental victory for the Trump movement," and Trump himself boasted to staff members that he'd played a role in forcing the senators out.

It was a stunning rebuke of sitting president from prominent members of his own party — and added to a chorus of criticism of Trump that has been growing louder and more public. Flake challenged his fellow senators to follow his lead, but there were few immediate signs they would.

At midafternoon, as fellow lawmakers sat in attentive silence, Flake stood at his Senate desk and delivered an emotional speech in which he dissected what he considered his party's accommodations with Trump and said he could no longer play a role in them.

"We were not made great as a country by indulging in or even exalting our worst impulses, turning against ourselves, glorifying in the things that divide us and calling fake things true and true things fake," he said.

Hours earlier, Corker leveled his own searing criticism of Trump in a series of interviews.

"I think the debasement of our nation will be what he'll be remembered most for and that's regretful," Corker said.

A furious Trump didn't let that pass unremarked. On Twitter, he called Corker "incompetent," said he "doesn't have a clue" and claimed the two-term lawmaker "couldn't get elected dog catcher in Tennessee."

An overstatement to be sure, but White House spokeswoman Sarah Huckabee Sanders said in regard to the impending retirements, "The people both in Tennessee and Arizona supported this president, and I don't think that the numbers are in the favor of either of those two senators in their states and so I think this was probably the right decision."

Away from the cameras, Trump took credit for helping force the two departures, according to a White House official and an outside adviser, who insisted on anonymity to discuss private conversations.

Until Tuesday, Flake had insisted he had no plans to retire. He was raising money at a good rate and casting his re-election campaign as a test case of conservatism against Trumpism. But he made clear Tuesday he'd concluded that, for now at least, Trumpism had prevailed.

"It is clear at this moment that a traditional conservative who believes in limited government and free markets, who is devoted to free trade, who is pro-immigration, has a narrower and narrower path to nomination in the Republican Party," he said.

Corker's retirement plans also underscore the question of what the Republican Party will look like in years to come. Senate Majority Leader Mitch McConnell of Kentucky has warned that some candidates running with the backing of Trump allies could not win general elections. And even if they make it to the Senate, certain conservatives could make McConnell's job even harder as he tries to maneuver legislation through a narrow majority that now stands at 52-48.

Steven Law, head of a McConnell-allied super PAC that supports GOP incumbents and establishment-aligned candidates, wasted no time issuing a statement declaring that Republican former state Sen. Kelli Ward, who was running against Flake with the encouragement of former Trump adviser Steve Bannon, "will not be the Republican nominee for this Senate seat in 2018." Many fellow Republicans had expected Flake to lose the primary and hope they will now be able to recruit a stronger candidate.

There was celebration in the Bannon anti-establishment camp. Said Andy Surabian, former Bannon adviser and now senior adviser to the Great America Alliance "Today's announcement from Sen. Flake that he would not run for re-election is a monumental win for the entire Trump movement and should serve as another warning shot to the failed Republican establishment that backed Flake and others like them that their time is up."

Talking principle rather than politics, Flake said on the Senate floor, "We must be unafraid to stand up and speak out as if our country depends on it, because it does. I plan to spend the remaining 14 months of my Senate term doing just that."

Earlier Corker had said of Trump, "His governing model is to divide and to attempt to bully and to use untruths." He said that he and others in the party had attempted to intervene with Trump over the months, sometimes at the behest of White House officials, but "he's obviously not going to rise to the occasion as president."

"Unfortunately I think world leaders are very aware that much of what he says is untrue," Corker said.

In between the broadsides from Corker and Flake, Trump himself made a rare visit to the Capitol to join GOP senators for their weekly policy lunch. Senators said he did not joust with Corker or anyone else — or spend much time talking about a tax overhaul, the expected topic for the lunch.

Tax overhaul is an urgent task for Republicans who've failed to notch a single significant legislative achievement this year despite controlling the White House and both chambers of Congress. Trump did discuss it, yet it was hardly his focus.

Instead, senators said, he mixed in a review of accomplishments so far on the regulatory front and others. At one point, he essentially polled senators on whom he should nominate as the next Federal Reserve chairman, asking for a show of hands on various candidates. He tweeted later that he had received "Multiple standing ovations!"

"We're going to concentrate on what our agenda is, and not any of these other distractions that you all may be interested in," he said.

However, even for Republicans who had no intention of seconding Flake's comments, the import of the day's developments was not lost.

"It's counterproductive when Republicans are battling amongst themselves," said Sen. Ted Cruz of Texas.