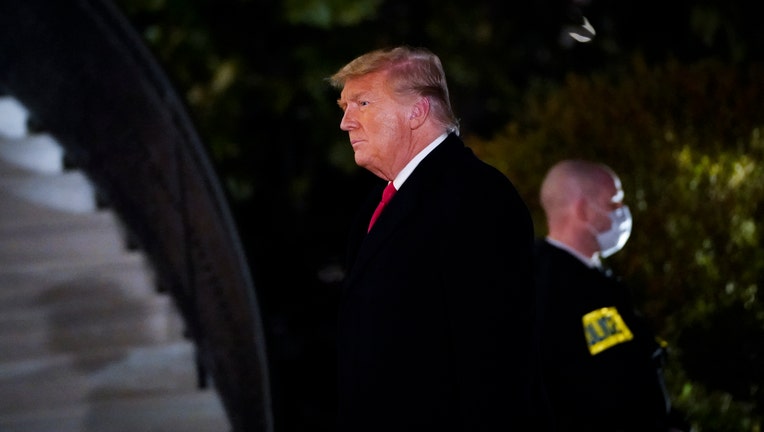 Donald Trump walks to the White House residence after exiting Marine One upon his return on January 12, 2021 in Washington, DC. (Photo by Drew Angerer/Getty Images)

PHOENIX - Officials with Google have taken action against President Donald Trump's YouTube account, days after the deadly riot at the U.S. Capitol.

"It now has its 1st strike, and is temporarily prevented from uploading new content for a minimum of seven days," read a portion of the tweet.

In another tweet, officials say comments will be indefinitely disabled on President Trump's YouTube channel, due to ongoing concerns about violence. Officials note this is also done to other channels where there are safety concerns found in the comments section.

In the aftermath of the riot at the U.S. Capitol, which has resulted in the deaths of at least five people, various social media networks have taken action against Trump and other contents that violate their policies.

On Jan. 8, Reddit officials announced they have banned the subreddit group r/DonaldTrump for "repeated policy violations in recent days regarding the violence at the U.S. Capitol.

Meanwhile, Google and Apple dropped the app "Parler" from their respective app stores, citing a lack of moderation for egregious content. Amazon later suspended the social network from its servers.

Parler had faced criticism following the riot, as screenshots taken from the network and shared on other social media platforms appear to show its users openly discussing plans for violence at the rally that preceded the attack on the Capitol, including bringing weapons and imagining how they would wield them against their political opponents.

On Jan. 11, Twitter announced it has removed more than 70,000 QAnon-associated accounts. The far-right conspiracy theory has existed in the darker corners of the internet since late 2017, but has been creeping into mainstream politics more and more.

That person, since identified as Jacob Anthony Chansley (commonly known as Jake Angeli) was taken into custody on Jan. 9, and is accused of violent entry and disorderly conduct on Capitol grounds.

The Associated Press (AP) contributed to this report.