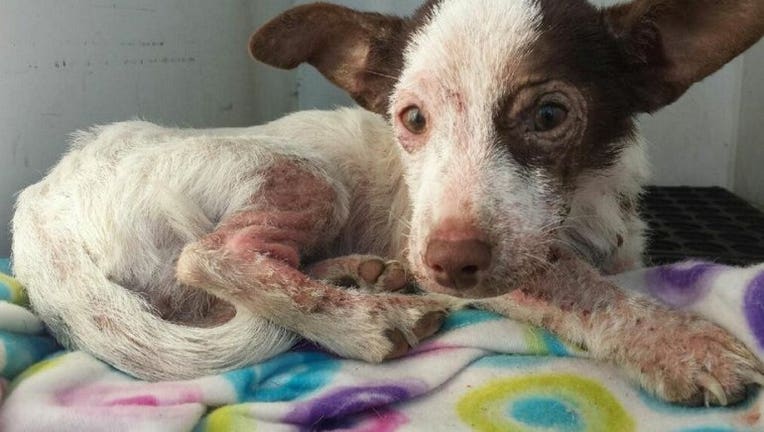 A sick dog who was abandoned then discovered by a good Samaritan in Fontana was recovering on Dec. 9, 2014. (KTLA)

LOS ANGELES -- A miracle dog named Gladys was getting a second chance at life thanks to good Samaritans who recently rescued the dog in Fontana after her owner or owners left her for dead, KTLA reported.

The abused and neglected dog was discovered in a trash bag on the side of the road two days before Thanksgiving by a woman who was out for an early morning walk, according to a news release from the Fontana Police Department.

"She was there inside the bag. She was scared and cold," said Karen Herrera, who rescued the dog. "I patted her on the back of her spine and she started, she was bleeding."

Herrera called police and another person came out wrapped the dog in a blanket as they waited for animal services officers to arrive.

Gladys, who suffered from bite marks and a treatable skin condition called "Mange," was then immediately taken to General Dog and Cat Hospital and San Bernardino and treated for her injuries.

"It is a felony in California to subject any animal to unjustifiable suffering and neglect," Fontana Animal Services Supervising Officer Jamie Simmons said in the news release. "If you cannot afford veterinary care, there are other options such as rescue groups, local shelters, or humane euthanasia through a licensed veterinarian to prevent its suffering."

It was not known who dumped the dog, and no arrests have been made in the case.

Gladys, meanwhile, was recovering at Sunshine Haven Animal Rescue and Rehabilitation, where she was being showered with "love and attention," the release stated.

"When she came in, she was kind of depressed, she was this sad dog that doesn't move much…not much activity," said Karolyn Vervill, who was treating her at Sunshine Haven.

Based on the dog's injuries, Vervill believed that the dog may have been used as an attack dog to train pit bulls.

In the week since she came to Sunshine Rescue, Gladys has made significant improvements. Her skin was clearing up, her bite marks were healing and she appeared to be playing well with other dogs.

Gladys was expected to make a full recovery within the next few months, at which time she would be put up for adoption.