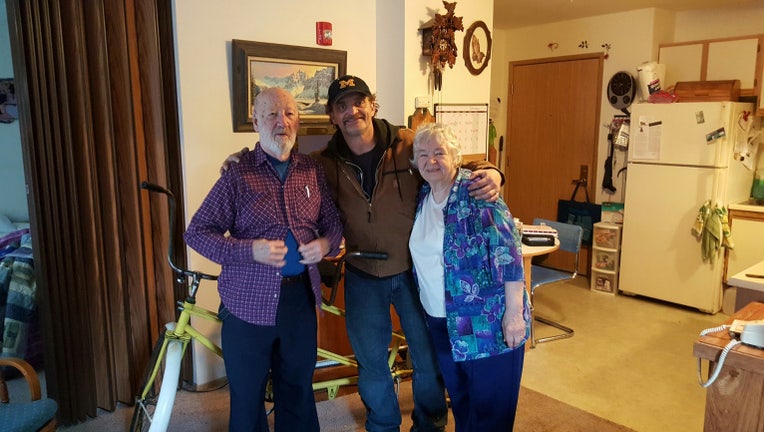 Trevor said he saw it on the news and felt bad that it was stolen so he returned it. He says he bought it off a street person for $50. Trevor cleaned it up and put new tires on it.

Mel plans to send him $50. The only things missing were a basket and the Just Married sign.

FEDERAL WAY, Wash. -- An elderly couple in Federal Way is hoping for a Christmas miracle.  A thief stole their bicycle built for two from in front of their apartment Monday night.

"It was parked right here. Right under my bedroom window," said Mel Hinz.

The bright yellow restored tandem bicycle was a Christmas gift from their children a few years ago.

"Apparently, they came prepared cause they cut the cable in half," he said.

Mel is a former Des Moines police chaplain who married his wife 66 years ago.  He and Mary met in 1st grade and then reconnected in junior high.

"We basically courted on bicycles," he said.

He saw his future wife when he moved to the neighborhood and sort of blocked her with his bike as she tried to ride by him, causing her to crash.  So did she ever forgive him?

"She married me," he said as he laughed.

Mel's children had a lot of fun kidding with them about how they met so when one of his daughters who has a talent for unique gifts saw the bike, she got it restored.  It was a perfect symbol of their parent's love.

"It was just lots of fun to see their eyes light up. It was just memories," said  Mel's oldest daughter who noticed it was gone when she came by Tuesday.  "With all that`s going on in the world right now, a bike`s not so bad but it would be nice to get it back," said Karen Warren.

Mel's neighbors miss the bike, too.

Jean Mckenna loved looking at it as she took out her trash.

"It`s sad that anyone would do that," she said.

Where others see an empty space though, Mel sees an opportunity.

"This gives me a nice open area now where I can put my Nativity scene," he said.

Besides he never could figure out how to get the bicycle worked in with the Three Wise Men.

“Maybe Mary and Joseph came to Bethlehem on the 2 wheel bicycle," he joked.

Now, this former pastor is reminding us all that to err is human, to forgive is divine.

"If they want to bring it back, no questions asked, no harm," he said.

So how bout a Xmas miracle?  "Yeah, right! I`ll go for that," he said with a smile and a twinkle in his eye.

Crime Stoppers is offering a cash reward of up to $1,000 for information that leads to the arrest of the bike thief. Call the hot line anonymously at 1-800-222-TIPS.