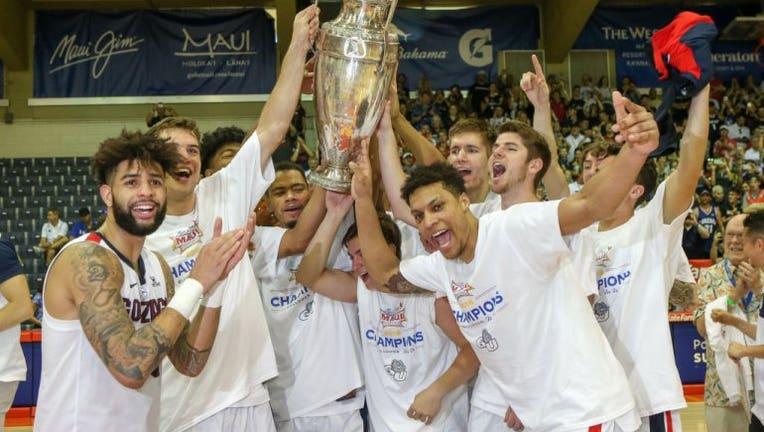 The Gonzaga Bulldogs pose for a photo with the 2018 Maui Invitational championship trophy after beating the Duke Blue Devils 89-87 at the Lahaina Civic Center on November 21, 2018 in Lahaina, Hawaii. (Photo by Darryl Oumi/Getty Images)

Gonzaga pulled off what some considered impossible, stopping the Duke juggernaut in the Maui Invitational title game without one of its best players. Now the Zags are No. 1 again.

Third in last week's poll , Gonzaga leapfrogged No. 2 Kansas to the top spot in The Associated Press Top 25 released Monday. The Zags received 32 first-place votes from a 65-person media panel, edging the Jayhawks by one.

No. 3 Duke received one first-place vote despite losing to Gonzaga in Maui and No. 4 Virginia the other one after winning the Battle 4 Atlantis title.

No. 5 Nevada has its highest ranking ever after winning the Las Vegas Invitational, with Tennessee, Michigan, Auburn, Michigan State and Kentucky rounding out the top 10.

Gonzaga (6-0) is missing do-everything forward Killian Tillie for the first two months of the season because of an ankle injury and was a big underdog heading into the Maui title game last week.

Duke (5-1) and its cache of lottery-pick freshmen were an unstoppable force the first four weeks of the season, blowing past then-No. 2 Kentucky in the season opener and winning its first three games in lopsided fashion.

Duke came to Maui undefeated on the Valley Isle, winning five titles in five tries, and opened with two wins to reach the title game.

Gonzaga punched the Blue Devils in the gut early in the championship game and withstood a late charge, relying on its experience to hold off Duke 89-87 to win its second Maui title.

"They're good. I mean they have good basketball players," Duke coach Mike Krzyzewski said. "They're strong, they're old, they're unselfish and they play their butts off."

Kansas was the preseason No. 1 until Duke blasted Kentucky in the opener and passed the Jayhawks for No. 1.

Kansas (5-0) has done nothing but win since then yet finds itself looking up at Gonzaga. The Jayhawks beat their second top-10 opponent of the season by holding off No. 6 Tennessee in overtime to win the NIT Season Tip-Off title in New York.

Nevada opened the season with its highest preseason ranking at No. 6. The Wolf Pack (6-0) have lived up to the lofty expectations, rolling over opponents with a deep, experienced roster led by the Martin twins.

Nevada won the Las Vegas Invitational by beating Tulsa by 10 points and UMass by 23 in the title game, moving up a spot for their highest ranking ever.

Villanova dropped out of the AP Top 25 after losing to Michigan and Furman for the first back-to-back losses under coach Jay Wright in five years.

The defending national champions are back in the poll this week at No. 23 after beating Oklahoma State and No. 15 Florida State to win the AdvoCare Invitational title in Florida.

Ohio State had the biggest jump in this week's poll, moving up seven spots to No. 16 after rolling over Samford and Cleveland State. Iowa climbed six spots to No. 14 and Purdue was up five to No. 19.

No. 25 Mississippi State had the biggest drop among teams still in the poll, losing 10 spots. No. 11 North Carolina lost four sports to drop out of the top 10 following a loss to Texas in the semifinals of the Las Vegas Invitational.

Texas went from out of the poll all the way up to No. 17 after beating the Tar Heels and playing No. 9 Michigan State close in the tournament's second title game. Texas Tech is in the AP Top 25 for the first time this season at No. 20 and Maryland came in at No. 24.

TCU had a precipitous drop after losing to Lipscomb at home, receiving eight votes after being No. 18 last week. Clemson dropped out from No. 16, LSU from 19 and UCLA from 17.