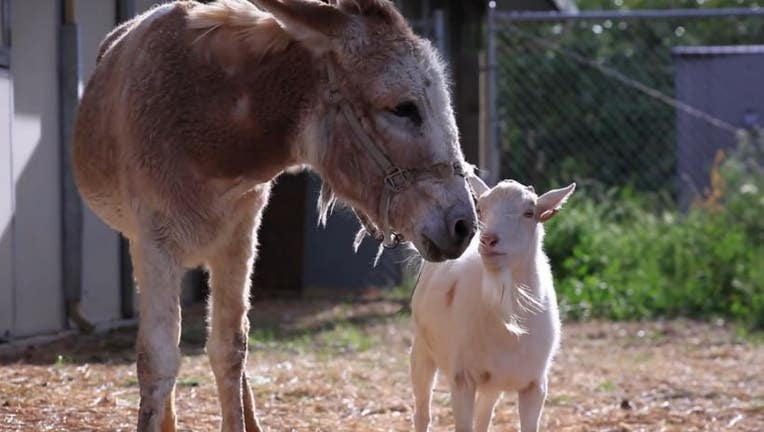 GRASS VALLEY, Calif – In early May a goat named Mr. G was rescued from the property of an accused hoarder who could not care for him or the dozens of other barnyard animals and pets she kept on her rural property.

Rescuers believe the 10-year-old goat had only known the horrible conditions in which he lived for his entire life, so when he arrived at Animal Place’s Rescue Ranch adoption center in Grass Valley California north and east of Sacramento they expected him to thrive.

Unfortunately Mr. G did not thrive.  In fact, he refused to eat and spent days sitting in a corner barely lifting his head.

Veterinarians examined Mr. G but determined there was nothing physically wrong with him.

As rescuers grew more desperate to help Mr. G they remember that for his decade of life he shared his squalid conditions with another farm animal of a different species and they wondered could the goat be missing his friend?

Jellybean the burro was also rescued from the same hoarder, but had been transported to a different animal sanctuary hours away.

Rescuers decided that would not stop them.

It took 3 additional days to bring Jellybean to Mr. G in Grass Valley.

“Mr. G erupted from his prone position, snorting and inhaling Jellybean’s presence,” wrote the staff at Animal Place in a blog post.  “He rushed after her into their outdoor pasture.”

The magic didn’t end there.

Rescuers said not only was Mr. G up and about, but suddenly after 7 days of starvation he bent his head down and began to eat from Jellybean’s bowl.

“Never doubt the depth of emotions other animals possess,” wrote rescuers.  “Mr. G’s grief was as deep and mysterious as a human’s. His joy at reuniting with Jellybean was as beautiful and inspiring as a human’s.