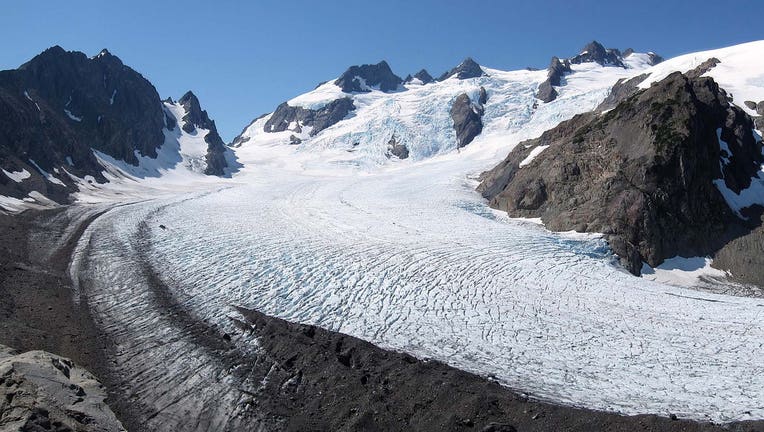 A panorama of the Blue Glacier on the North side of Mount Olympus in the Olympic Mountains of Washington taken from the Lateral Moraine. (Aaron Linville // CC BY-SA 4.0)

PORTLAND, Ore. - Researchers at Portland State University predict that by 2070, the glaciers on Washington’s Olympic Peninsula will have mostly melted away.

According to their study published in JGR: Earth Surface, the glaciers have already lost half their area since 1900, and since 1980, 35 glaciers and 16 year-round snowfields have melted away completely.

Researchers say that some glaciers are likely to remain, but will be "shells of their former selves."

"There’s little we can do to prevent the disappearance of these glaciers," said PSU geology professor Andrew Fountain. "We’re on this global warming train right now. Even if we're super good citizens and stop adding carbon dioxide in the atmosphere immediately, it will still be 100 years or so before the climate responds."

Even with recent strides in fighting climate change, glaciers continue to melt over long stretches of time as they "catch up" to the environmental damage done by rapid industrialization.

When the glaciers melt, it creates a domino effect on the surrounding environment—researchers say alpine streams will decrease, and species like bull trout will die off as the cold water they are used to warms up.

RELATED: Majority of Americans favor US taking steps to be carbon neutral by 2050, Pew survey finds

"Once you lose your seasonal snow, the only source of water in these alpine areas is glacier melt. And without the glaciers, you're not going to have that melt contributing to the stream flow, and therefore impacting the ecology in alpine areas," said Fountain. "That's a big deal with disastrous fallout."

Data from the U.S. Geological Survey charts a similar glacial melt across the North Cascades, and photos taken in 1968, 1978, 2012 and 2015 show a dramatic receding of the Nisqually Glacier on Mount Rainier. That same study shows a decline in glacial ice in Glacier National Park and Alaska. 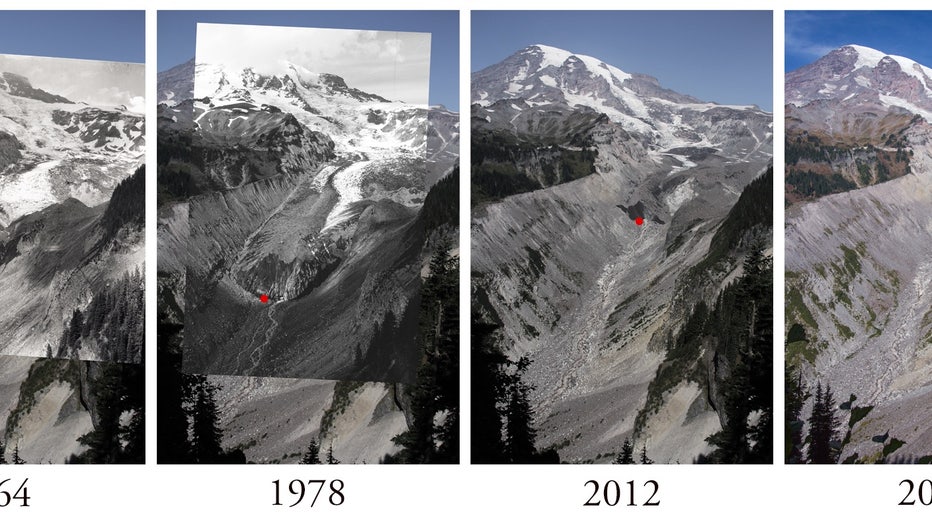 "This assessment of glaciers in the Olympic Mountains underscores two key elements of glacier vulnerability. The first is warming summer temperatures, which affect the persistence of glacier ice throughout the summer melt season," said USGS scientist Caitlyn Florentine. "The second, less obvious, is warming winter temperatures, which affect the replenishment of glacier ice during the winter snow accumulation season. This double whammy has downstream implications for glacier-adapted ecosystems in the U.S. Pacific Northwest."

PSU researchers say the Olympic glaciers are especially vulnerable to melting due to their lower elevation. Warmer summers means more glacial melt, and warmer winters means instead of snow, glaciers are hit with rain, which leads to further melt.

Fountain says his next goal is to "develop a comprehensive view of glaciers" across the Western U.S., including Washington, Oregon, California, Montana, Wyoming and Colorado.