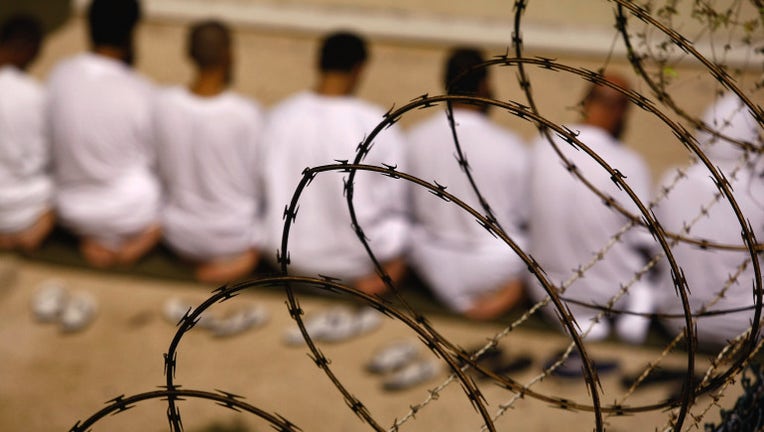 Image has been reviewed by U.S. Military prior to transmission) A group of detainees kneels during an early morning Islamic prayer in their camp at the U.S. military prison for "enemy combatants" on October 28, 2009 in Guantanamo Bay, Cuba. From Gett

Editor's note: Samir Naji is a Yemeni who was accused of serving in Osama bin Laden's security detail and imprisoned for nearly 13 years without charge in Guantanamo Bay. He was cleared for release in 2009, but remains in detention. The following first-person testimony, recorded during his most recent meeting with lawyers from the international human rights organization Reprieve, has just been released by prison censors. The opinions expressed in this commentary are solely his.

It starts and ends in the silence of a tiny, freezing cold cell, alone.

That's when you hold yourself in a ball, and fight to ignore the confusion of what has just happened to you, and the fear of what might be coming next. Or the fear that comes when you realize that no one is coming to help; that the life, family and friends you knew are all far, far away.

The cell door opens. The next session, seemingly the 100th in a row. I think my first period of interrogation lasted three full months. Two teams of interrogators running shifts, day and night.

Each session begins with shouting, to wake me up. Then they hit me on the face and the back. I am so desperate for sleep, my head is swimming. There are photographs of faces stuck all around the walls of this room. They demand that I identify the individuals, but I can barely focus to see if I might know them. The shouting and the insults get louder, and then they nod to a man in the corner. He injects me twice in the arm with some unknown substance. It's the last thing I know.

I tried to refuse to eat the little food they bring me, in protest at all this. The interrogator laughs at me, but then turns angry; he swears loudly, and pours an army meal pack over my head. They tell the man in the corner to start feeding me intravenously. He inserts the tube in two different places on my arm and makes it bleed.

The freezing cold cell. The cell door opens. This time the guards push me on the floor and take turns trampling over my back.

I tell the interrogators that I can't face not eating any more. They throw food on the floor of the room and tell me to eat like a pig. They won't let me go to the restroom. They watch as it gets more painful, and laugh as they get the translator to describe how they will rape me if I pee in my pants.

The freezing cold cell. The cell door opens. They make me stand and salute the American flag.

I'm in a sort of cinema room, where I have to watch videos of other prisoners being abused. Then they tell me that I have to dance for them, and run in circles whilst they pull on my chains. Every time I try and refuse, they touch me in my most private areas.

The freezing cold cell. The cell door opens. It has rained, and there are muddy puddles everywhere. I'm shackled, so I can't really walk; they deliberately drag me through the muddy puddles.

Now it's the pornography room. Awful pictures everywhere. There is one with a man and a donkey. I'm stripped naked and have my beard shaved, in a gratuitous insult to my religion. I'm shown pornographic pictures of women. I'm told to make the noises of different animals, and when I refuse, they just hit me. It ends with them pouring cold water all over me.

Hours later in my cell, I am discovered, nearly frozen. The doctor tells them to bring me urgently to the clinic, where I am given a blanket and treatment. Over the next hours, they observe me as I warm up. They are just waiting for the moment that they can sign off on my return to interrogation.

Four years ago, six U.S. government security agencies sat together and reviewed my case. Their conclusion? That I was innocent of any crime and should be released. The dirty and sadistic methods I endured -- which were then taken directly to Abu Ghraib -- achieved nothing, except to shame that American flag hanging in the prison corridor, which I was made to salute.

One hundred and thirty-six prisoners are still being held at Guantanamo, whilst the politicians squabble over how to black out the Senate report. America cannot keep hiding from its past, and its present, like this. Our stories, and our continued detention, cannot be made to disappear.