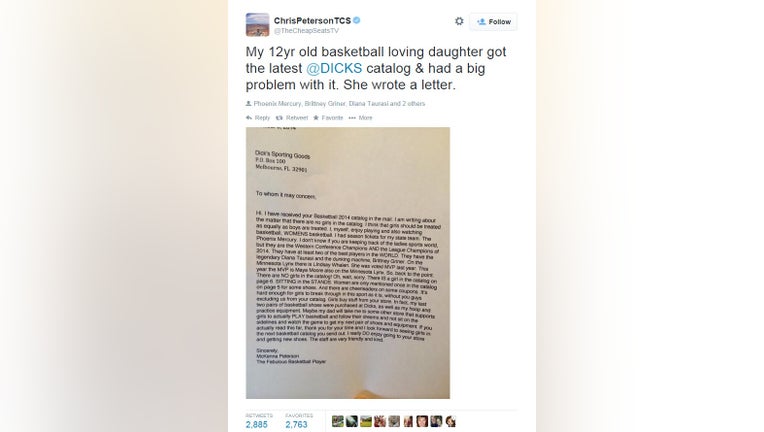 (CNN) -- A 12-year-old girl from Arizona has called out Dick's Sporting Goods for failing to include female athletes in its 2014 basketball catalog -- and she's getting plenty of backup on the Web.

McKenna Peterson's letter to the company, which her father later tweeted, drew attention to the lack of gender equality in the ads.

"I think that girls should be treated as equally as boys are treated," she wrote. "I, myself, enjoying playing and watching basketball, WOMENS basketball."

The self-proclaimed "Fabulous Basketball Player" has been praised on Twitter for bringing attention to the issue.

Although the basketball catalog does include women, they are portrayed in passive or supportive roles: "sitting in the stands" or "mentioned once in the catalog on page 5 for some shoes" or as "cheerleaders on some coupons," McKenna wrote.

"It's hard enough for girls to break through in this sport as it is, without you guys excluding us from your catalog," she added.

The Petersons say they may take their business elsewhere unless Dick's resolves to include more women in its advertising; McKenna even named several of her favorite professional women's basketball players who would fit the bill in the letter.

"Maybe my dad will take me to some other store that supports girls to actually PLAY basketball and follow their dreams and not sit on the sidelines and watch the game to get my next pair of shoes and equipment," McKenna wrote.

UPDATE: McKenna's father, Chris Peterson, tweeted out a response note the family received from Dick's and expressed his disappointment with the "form letter."

A Dick's representative later contacted the family by phone.

"They said that they liked her letter and that in future publications they will consider putting more women in the catalog," Peterson told CNN. "They also pointed us to a commercial that they are running that apparently has a girl in it. It was a very nice conversation that McKenna re-stated her opinion that there needs to be more girls represented."