Thousands lined the harbor front and work ground to a halt in offices with sea views as the much-hyped 'Rubber Duck' made its grand entrance. For two weeks local media has been on something of a "duck watch," closely monitoring the movements of the 16.5-meter (54 feet) inflatable sculpture.

The man behind the seriously over-sized bath toy, Dutch artist Florentijn Hofman, described the Hong Kong response as overwhelming and said he was happy to have finally made it to the city, his first visit.

"I've wanted to come for years -- and my duck made it here before me!" he quipped. 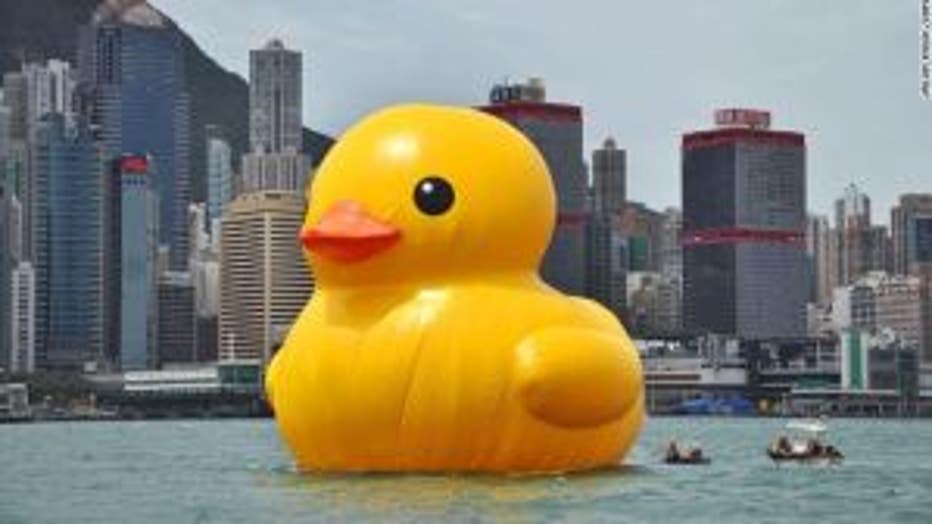 The sunshine-yellow duck drew up beside Ocean Terminal to the sound of a brass band and thousands of camera shutters.

"Hong Kong has been changed forever," declared Hofman as his inflatable friend lent a surreal air to the city's iconic skyline.

It's a very well traveled duck. Since it started on its global adventures, Rubber Duck has taken up temporary residence in cities all over the world, including Osaka, Sydney, Sao Paolo and Amsterdam. It will be in Hong Kong's Victoria Harbour until June 9.

Though it may be modeled on a child's toy, this massive public art installation isn't just for kids.

"I see it as an adult thing. It makes you feel young again. It refers to your childhood when there was no stress or economic pressure, no worry about having to pay the rent," said Hofman.

There were a lot of smiles and laughter as Rubber Duck made its splash but Hofman says he doesn't expect everyone to react with big grins.

"If it makes you smile, then that's OK, but maybe it makes you cry because of the urban environment. I make work not to give answers but to question things," said the 36-year-old father of three.

Hofman conceived the idea for the project in 2001. Twelve years on his own reaction to Rubber Duck is no longer simple.

"It's getting complex because I have so many thoughts about it and so many minutes of talking and thinking about it," he said.

He urged everyone who can to get out and enjoy the free public art.

"Be amazed, be creative. Look at it with your eyes and absorb the energy of the work in this location," he said.

Next stop for Rubber Duck is the United States. The exact destination is a closely guarded secret.

"In the States it will stay a secret until the last week."