'How did my dad get hurt?': George Floyd's daughter remembers father at Chauvin sentencing

At the sentencing hearing for former Minneapolis police officer Derek Chauvin, George Floyd's daughter Gianna told the court that she asks how her father got hurt and wishes that he was still here. Chauvin was convicted of second-degree murder, third-degree murder and second-degree manslaughter in Floyd's death.

"I ask about him all the time," Gianna Floyd said of her late father in a video impact statement that played Friday ahead of Chauvin’s sentencing. "Those mean people did something to him... I miss you and I love you."

Gianna’s father, George Floyd, died on May 25, 2020, after Chauvin pinned him to the ground and pressed his knee on his neck even as Floyd, who was handcuffed, repeatedly cried out that he could not breathe. Chauvin was convicted of second-degree unintentional murder and other charges in Floyd’s death.

Gianna Floyd said in the victim impact statement that she believed her dad was still with her in spirit and that she wants to know how he got hurt.

"Do you wish that he was still here with us?" a woman asks Gianna Floyd in the video, to which she replied: "Yeah, but he is." 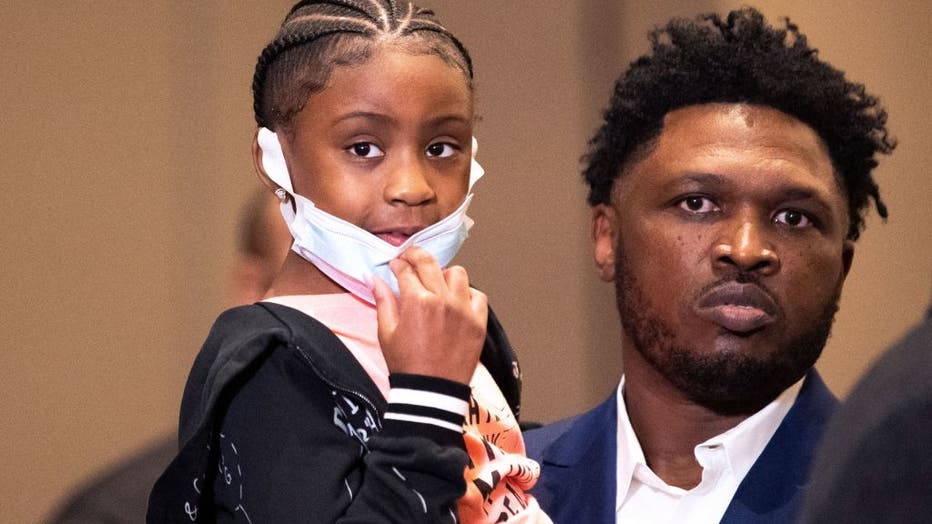 She had a long list of things she would still have liked to do with her father. "I want to play with him, have fun, go on a plane ride."

"We used to have dinner meals every single night before we went to bed," she said. "My daddy always used to help me brush my teeth."

Gianna Floyd’s statement was the first of several victim impact statements by George Floyd’s family members given at the sentencing.

"We don’t want to see no more slaps on the wrist. We’ve been through that already," said a tearful Terrence Floyd, one of George Floyd's brothers.

"On behalf of me and my family, we seek the maximum penalty," Terrence Floyd added.

Another of George Floyd's brothers, Philonise Floyd, wiped his eyes and sniffled as he too asked for Chauvin to receive the maximum sentence.

Philonise Floyd, the brother of murder victim George Floyd, spoke at the sentencing for Derek Chauvin in Minneapolis, Minnesota. Floyd asked for the former officer to receive the maximum possible sentence for second-degree murder.

"My family has been given a life sentence," he said. "We will never be able to get George back."

George Floyd's nephew Brandon Williams said: "Our family is forever broken." And George Floyd's 7-year-old daughter, Gianna, in a video played in court, said that if she could say something to her father now, it would be: "I miss you and and I love you."

Before the sentencing, the judge denied Chauvin’s request for a new trial. Defense attorney Eric Nelson had argued that the intense publicity tainted the jury pool and that the trial should have been moved away from Minneapolis.

The judge also rejected a defense request for a hearing into possible juror misconduct. Nelson had accused a juror of not being candid during jury selection because he didn’t mention his participation in a march last summer to honor the Rev. Martin Luther King Jr. Prosecutors countered the juror had been open about his views.

Chauvin, 45, faced a potential decades-long sentence, with some legal experts predicting 20 to 25 years. He is also awaiting trial on federal civil rights charges in Floyd's death, along with three other fired officers who have yet to have their state trials.

Chauvin was convicted of second-degree unintentional murder, third-degree murder and second-degree manslaughter for pressing his knee against Floyd’s neck for up to 9 1/2 minutes as the 46-year-old Black man gasped that he couldn’t breathe and went limp.

George Floyd's death after his arrest by police officers in Minneapolis on May 25, 2020, sparked widespread anger after millions of people saw video of the event.

The four officers at the scene were quickly fired and charged in his death. The agonizing bystander video shows Floyd repeatedly crying "I can't breathe" and eventually going still as Chauvin continued to press his knee on Floyd's neck.

The video's release sparked immediate protests and sometimes violent riots nationwide and around the world. Chauvin was being sentenced Friday after being convicted of murder and manslaughters in April.