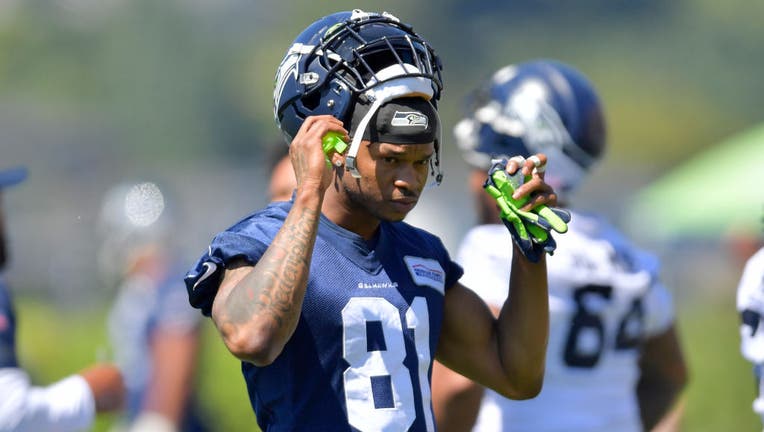 RENTON, Wash. - Gerald Everett slid into the corner of the end zone, making a difficult catch while being draped by a defender. When he stood up, the entire Seattle Seahawks offense was on its way over to celebrate.

Yes, it was just the opening days of training camp and, in the grand scheme, a meaningless touchdown catch. But it was also a glimpse of what Seattle is hoping the athletic tight end can bring given the chance.

"This is a guy with an excellent range of ability. And probably the thing we like best is how competitive he is," coach Pete Carroll said.

Everett’s signing was not seen initially as a major move in light of everything the Seahawks did in free agency during the offseason. But it may end up being one of Seattle’s shrewdest additions for multiple reasons.

First is what Everett can provide in his role at tight end. With Will Dissly’s early career hampered by major injuries and the Seahawks unsure what they have in 2020 fourth-round pick Colby Parkinson, Everett begins camp as the primary target at the position.

"There was a lot of stuff that went into the decision, but it was just trying to chase a championship," Everett said. "Playing with the Rams, we had a championship culture there and we had a couple good runs. But I want to win a Lombardi (Trophy) and most of the guys here share that same goal."

There was also an ancillary benefit of adding Everett. After spending the previous four seasons playing for the Los Angeles Rams, where new Seattle offensive coordinator Shane Waldron was one of his coaches, Everett has become a regular sounding board for teammates about the Seahawks’ updated offense.

But even Everett finds himself having questions now and then as Waldron is trying to merge what he brought from LA with what has worked for Seattle in the past.

"I still have questions, too, just because it’s not the same stuff. We had to rearrange some things," Everett said. "A lot of the stuff that we’re doing at the Rams conceptually is the same, but it’s different terminology. And definitely trying to incorporate some of the Seahawks (offense), some of the things that they did as well into making it a collective thing."

Everett had to share his role in Los Angeles with Tyler Higbee. Last season, Everett had a career-high 41 catches for 417 yards but was rarely a red-zone target. Those opportunities seemed to go to Higbee, who had five TD catches to Everett’s one.

There is still likely to be some sharing in Seattle but there’s also an opportunity for Everett to emerge as the No. 3 option behind Tyler Lockett and DK Metcalf in Seattle’s passing game.

Having a consistent No. 3 pass-catcher was a problem last season for Seattle. They thought some of the issue was resolved by drafting wide receiver D’Wayne Eskridge in the second round out of Western Michigan. But Eskridge is currently on the physically unable to perform list with a toe injury.

"Me being a versatile player, I think just being able to do a little bit of everything. I could be the ball carrier. I can run routes. I can block, pass-pro," Everett said. "Just being able to do all those things on a given play and not being predictable would be one of the main things for me."

Everett also knows he’s playing for job security. He’s on a one-year deal in Seattle and fully aware a good season could mean a long-term deal and a nice pay day in the future, whether with the Seahawks or elsewhere.

"Whether it’s a one-year deal or a four-year deal you got to treat every day the same," Everett said. "As soon as you get complacent that’s when you find yourself out of the league."

NOTES: LB Bobby Wagner missed practice because of a family situation. ... Still no word on when SS Jamal Adams will see the field. Adams and LT Duane Brown have been on the sidelines through the first few practices. ... New QB Sean Mannion took part in his first practice. Carroll said Mannion’s familiarity working with Waldron in the past was a factor in signing the veteran.