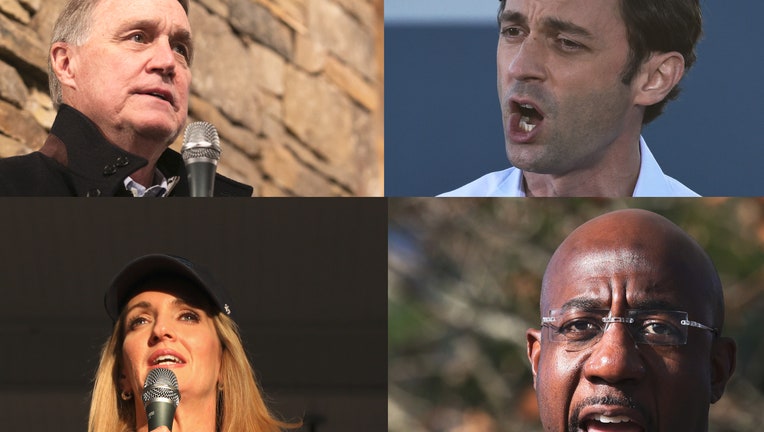 Georgia voters will head back to the polls on Tuesday to determine the balance of power in Congress as they cast votes in two pivotal Senate runoff races.

Millions of dollars have poured into the hotly contested races. Georgians have been bombarded by advertisements and messages urging them to vote, and both sides have sent their heavy-hitters to help turn out voters.

A record number of Georgia residents have already turned out to vote early, with more than 2 million people having voted in person and nearly 930,000 voting by mail ahead of the Jan. 5 races.

While Democrats have control of the U.S. House of Representatives, it’s still undetermined which political party will control the U.S. Senate.

If both Democratic candidates win Tuesday’s election, it would evenly split the Senate and give both Democrats and Republicans 50 seats each.

If there’s ever a tie when senators vote, Vice President-elect Kamala Harris, a Democrat, will cast her vote, breaking the tie.

If one or both Republicans win Tuesday’s race, the GOP will retain their control of the Senate.

Whichever political party controls the Senate will have an impact on what legislation ultimately makes it through Congress.

The judiciary is also affected. Senators are responsible for confirming judges to the U.S. Supreme Court after the president nominates them.

RELATED: Joe Biden to campaign in Georgia in final push to win Senate

Perdue got about 88,000 more votes than Ossoff in the general election, but a Libertarian candidate’s 115,000 votes kept him from topping 50%, which is required to win.

Georgia Gov. Brian Kemp appointed Loeffler to the Senate in December 2019 after Sen. Johnny Isakson stepped down. She and Warnock were competing in a 20-candidate special election to serve the two years remaining in Isakson’s term.

There’s concern among some in the GOP that President Donald Trump’s efforts to falsely cast the 2020 election results in Georgia as illegitimate and fraudulent may dampen Republican turnout at the polls.

According to Ryan Anderson, a nonpartisan data analyst in Atlanta, early turnout in Democratic congressional districts outpaces Republican districts when compared to the November election. There are still at least 300,000 absentee ballots outstanding.

"I’m hearing from people already, ‘Why would I bother voting when the whole system is rigged?’" Buzz Brockway, a former Republican state representative, told the Los Angeles Times. "But if that seeps in, then Republicans have a real problem."

Further fueling apparent GOP infighting in the state and on the national political stage, Trump pressured Georgia’s Republican secretary of state to "find" enough votes to overturn Biden’s win in the state’s presidential election, repeatedly citing disproven claims of fraud and raising the prospect of a "criminal offense" if officials did not change the vote count, according to a recording of the conversation.

The phone call with Georgia Secretary of State Brad Raffensperger on Saturday was the latest step in an unprecedented effort by a sitting president to press a state official to reverse the outcome of a free and fair election that he lost.

The Republican president, who has refused to accept his loss to Democratic President-elect Joe Biden, repeatedly argued that Raffensperger could change the certified results.

Perdue, 70, is wrapping up a six-year term. The Republican was first elected in 2014 after running as a political outsider and former CEO of Reebok and Dollar General. In his first term, Perdue became known as one of Trump’s chief defenders in the Senate and supported many of his policies.

He’s now under fire for multimillion-dollar trades of stock in companies whose business he oversaw while serving on the Senate Banking Committee.

An investigation by FOX 5 Atlanta found stock trades made by Perdue involving a regional bank that benefited from legislation he supported and helped write. Perdue pushed and supported a bill rolling back Obama-era regulations on smaller regional and community banks.

In May of 2017, Perdue began buying stock in one of the regional banks that stood to benefit from that legislation: Regions Financial Corporation. This, according to his financial disclosures.

Perdue has denied any wrongdoing.

Ossoff, if elected, would be the Senate’s youngest member at age 33. His introduction to politics came as a college student when he interned for Georgia U.S. Rep. John Lewis, the Democrat and civil rights hero who died in July. He currently runs a company that produces documentary films.

Ossoff has campaigned on ensuring all Americans have health insurance and is pro-choice on the issue of abortion.

The television executive has had to defend himself against accusations from Perdue that he’s being backed by the Communist Party USA. Perdue has repeated the claim about the Communist Party’s endorsement multiple times in the campaign, including in Dallas, Georgia, on Saturday.

The accusation stemmed from Ossoff failure to disclose compensation from a Hong Kong company — which is connected to the Chinese government — to his production company, according to FOX News.

Ossoff later amended his financial disclosure statements to reflect the payments and denied getting an endorsement from the Communist Party USA.

Loeffler, 50, is a junior senator. According to her website, she started her career in financial services after she helped launch a startup company, Intercontinental Exchange, which later became a Fortune 500 company. She also has holdings in the WNBA with the Atlanta Dreams.

Her platform has included getting rid of the Affordable Care Act and building the U.S.-Mexico border wall.

But she has also faced controversy.

Reports surfaced about how Loeffler sold large amounts of stock before the market crashed due to concerns about the coronavirus, fueling accusations of insider trading.

Loeffler liquidated her stock holdings last year after much scrutiny and denied any wrongdoing.

Warnock, 51, serves as the senior pastor of Ebenezer Baptist Church in Atlanta, where the late Dr. Martin Luther King Jr. also served as a reverend.

He’s calling for bail reform and an end to mass incarceration, a living wage and job training for a green economy, expanded access to voting and health care, and student loan forgiveness.

Controversy has also followed him.

His wife told a police officer in March last year that her husband is "a great actor" and "phenomenal at putting on a really good show," after Warnock denied her allegations that he deliberately ran over her foot.

Warnock told an officer they had an argument over divorce papers while their two kids were present. He said that his wife prevented him from closing the car door by standing in front of it.

When will we know the outcome?

Just like in November, it’s very possible Americans will go to bed Tuesday without knowing who won. All indicators point to the likelihood of very tight margins in both races.

The Associated Press and FOX News contributed to this report. This story was reported from Los Angeles.