TUCSON, Ariz. -- Say a gay couple in Phoenix walks into a bakery to order their wedding cake. The baker refuses to take their order because of his deeply held religious beliefs. Under a measure that passed the Arizona Legislature this week, the baker would have greater protection to invoke religion to shield himself from a discrimination lawsuit.

The bill, approved by the Republican-controlled Senate on Wednesday and the GOP-led House on Thursday, would bolster a business owner’s right to refuse service to gays and others if the owner believes doing so violates the practice and observance of his or her religion.

The state Senate passed it on a straight party-line vote, 17 to 13. The House followed suit, 33 to 27, with two Republicans joining all the Democrats in opposition. 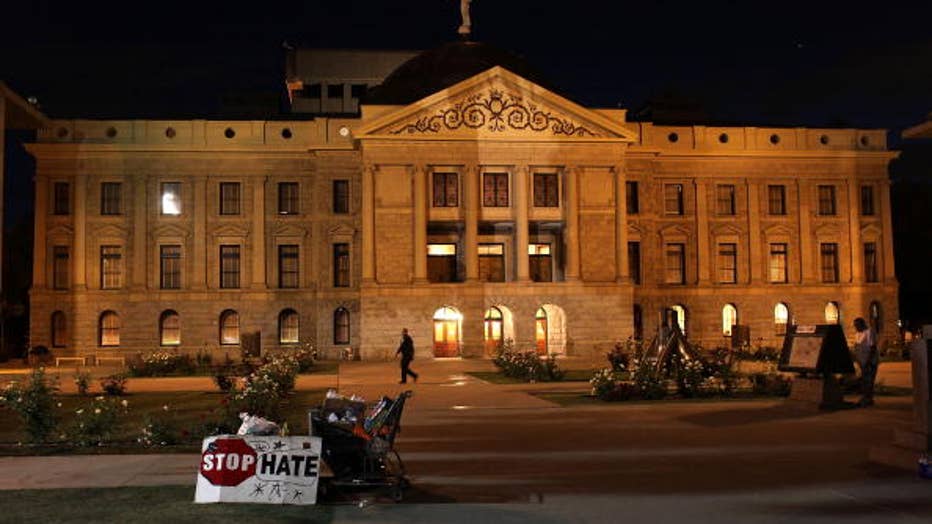 A view of the Arizona state Capitol in Phoenix. (Photo taken in 2010 by John Moore/Getty Images)

GOP Gov. Jan Brewer’s office said she would not take a position until she'd had a chance to review the measure.

Proponents contend the bill is about protecting religious freedom, rights that “must be respected,” said Republican Sen. Steve Yarbrough, who introduced the measure.

Republican Rep. Eddie Farnsworth, a House sponsor, said there had been an “onslaught of attacks on religious freedoms.” The bill, he said, “is trying to protect those freedoms.”

But opponents, including Democratic lawmakers and gay activist groups, describe the bill as unconstitutional, discriminatory and divisive.

It would “permit discrimination under the guise of religious freedom,” said Sen. Ana Tovar, a Democratic leader.

Democrat Chad Cambpell of Phoenix, the House minority leader, tweeted after the bill passed: “The world is upset with how Russia has treated gay rights...I think it's time for that same anger to be directed towards AZ.”

Arizona’s legislation is similar to proposals in other states, including ones that failed in Kansas and Idaho. Another is under consideration in Utah.

Shannon Minter, legal director for the National Center for Lesbian Rights, is confident that courts would strike down the measure if it became law.

“The Arizona Senate bill is blatantly unconstitutional,” Minter said. “It violates the requirement of equal protection of the laws by openly singling out a particular group of people and saying it’s OK to discriminate against them.”

Tovar said such a law could elicit boycotts.

“With the express consent of Republicans in this Legislature, many Arizonans will find themselves members of a separate and unequal class under this law because of their sexual orientation,” Tovar said. “This bill may also open the door to discriminate based on race, familial status, religion, sex, national origin, age or disability.”

Yarbrough accused the opposition of distorting his bill.

“The religious beliefs of all Arizonans must be respected, and this bill does nothing more than affirm that,” Yarbrough said in a prepared statement. “Those that oppose this bill oppose our diverse society and do not have tolerance for their fellow neighbors with deeply held religious beliefs.”

Yarbrough disputed claims that the bill would legitimize discrimination.

“The protections in law today against discrimination will still be in place and enforced if SB 1062 becomes law, and SB 1062 does nothing to change that,” he said.

His assertions failed to mollify the opposition, however.

“Once again Arizona’s Legislature is on the wrong side of history,” said Alessandra Soler, executive director of the American Civil Liberties Union of Arizona. Gays and lesbians “own homes, run businesses and pay taxes just like everyone else, but under the guise of religious freedom they are now being vilified by Arizona lawmakers.” The bill, she said in an email, allows “individuals and businesses to use religion to discriminate, sending a message that Arizona is intolerant and unwelcoming.”

The legislation comes as support for same-sex marriage is gaining momentum in the courts, and on the heels of two cases in which state courts sided with gay couples in wedding-related lawsuits.