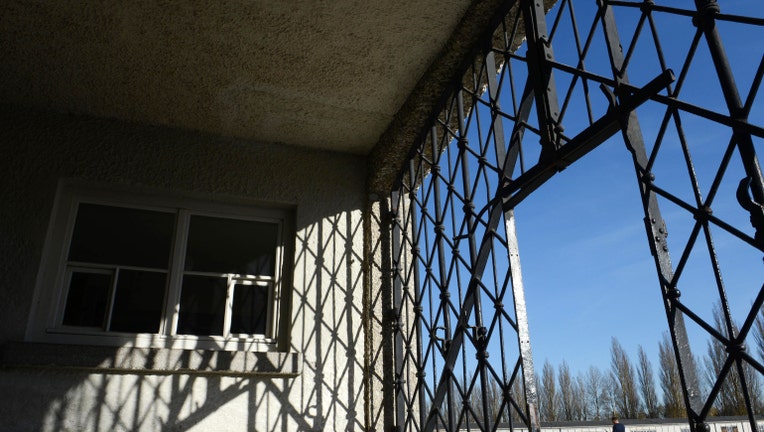 The entrance gate without the door of the former concentration camp in Dachau, southern Germany, pictured on November 3, 2014. This gate with the inscription 'Work sets you free'

BERLIN -- An iron gate with the notorious Nazi slogan "Arbeit Macht Frei" has been stolen from the former Dachau concentration camp in Germany, officials said.

The slogan, which translates as "Work sets you free," became emblematic of the forced labor camps of World War II in which so many inmates died.

The gate was stolen overnight from Saturday to Sunday, officials at the Dachau Concentration Camp Memorial said in an online statement.

While this is the first such theft at Dachau, it's not the first time that the slogan has been targeted by thieves. The famous "Arbeit Macht Frei" sign at the Auschwitz-Birkenau concentration camp in Poland was stolen in 2009. It was discovered shortly afterward cut into three pieces.

The Dachau center's director, Dr. Gabriele Hammermann, described this weekend's theft as a "deliberate, reprehensible attempt to deny and obliterate the memory of the crimes committed in this place."

The gate is of "highly symbolic importance," he said, and its removal is "an attempt to demolish the memorial at its very core."

Hammermann said it was no coincidence that the theft occurred at a time when the number of survivors of the camps was dwindling due to their age -- and stressed that efforts to protect such historic sites and educate the public must continue, especially in the face of far-right radicalization.

It's not yet known who was behind the theft.

Dr. Max Mannheimer, a Holocaust survivor and vice president of the International Dachau Committee, said he was "horrified that Nazis apparently so desecrated the memorial to those murdered here and violated the reverence due to such a place."

The Yad Vashem Holocaust memorial museum said, "While we do not know who is behind the theft of the sign, the theft of such a symbolic object is an offensive attack on the memory of the Holocaust."

According to the Dachau Concentration Camp Memorial, the gate was forged by inmates in one of the camp's workshops after it first opened in 1933 for political prisoners.

A Communist inmate was ordered by the SS to fashion the lettering "Arbeit macht frei," which was removed after the war and replaced by a reconstruction when the memorial was established in 1965, it said.

The propaganda slogan "reflects Nazis' attempts to appear harmless by presenting the concentration camp as a 'work and reeducation camp,'" it said.

Tens of thousands of Jewish, Sinti and Roma prisoners were also sent to the camp, many of whom died before it was liberated by U.S. Army troops in 1945.