SEATTLE – Technology and training are merging to create a futuristic fitness workout where a suit people put on while working out does most of the work. Electric Muscle Stimulation has been around since the '50s but now it’s gaining popularity as a fitness option.

“One active impulse,” said Michka Mirzanejad, owner of Body by Impulse in Green Lake, at the start of a workout with her clients.

This EMS workout is so intense trainers only recommend people do it twice a week at most. 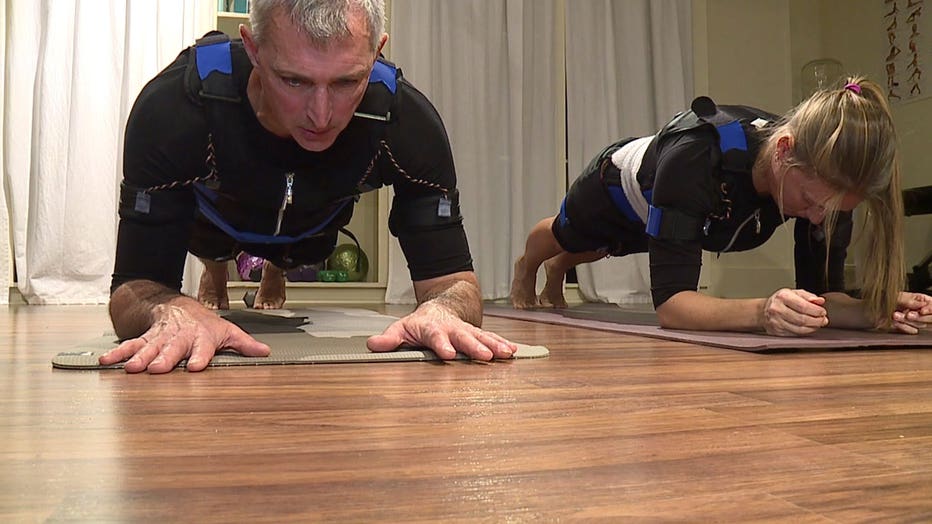 “You’re enhancing your workout 18x by doing an EMS workout,” said Mirzanejad, who is a massage therapist by training. She grew up in Germany and tried an EMS workout herself and decided she found her calling.

“We’re in one of the techiest cities in the world, and you can’t get any techier than this for working out,” said Mirzanejad.

Now in her own Seattle studio, she suits up her clients in what looks like a wetsuit with 16 electrodes above every major muscle group.

Today, she’s training Bryan Hensley and Annette Hede-Jessen. Their suits are wirelessly connected to avatars on iPads that Mirzanejad controls. She can customize the intensity of the impulse and the frequency.

This 20-minute workout looks relatively simple. The pair get electrical impulses every six seconds into those muscle groups.

“It’s a buzzing feeling you get in your muscles,” said Hensley.

Hensley and Hede-Jessen say they work out regularly on their own. Hensley says he runs three days a week and said after starting EMS a few months ago, he has been able to cut down a few minutes on his miles and improve strength.

“I’ve been able to push past some plateaus,” said Hensley.

“I have to lift flour bags, they are heavy,” said Hede-Jessen.

The heavy lifting has led to lower back pain, which she says has gotten better since starting EMS.

The technology behind EMS is nothing new. Dr. Dale Cannavan teaches exercises physiology at Seattle Pacific University. He says it’s been around the 1950s.

“It’s been predominantly used as a therapeutic modality, getting back from injury, or trying to prevent muscle wear stage after burns or traumatic surgery,” said Cannavan.

EMS for exercise started in the 1970s in the Soviet Union and gradually gained popularity in Europe and now it’s becoming a fitness trend in America. Cannavan says it is generally safe.

“You’re enhancing your workout 18x by doing an EMS workout"

Clients at Body by Impulse get screened before getting hooked up. Mirzanejad says if you have a heart condition, a pacemaker or any kind of electrical device in your body, tumors, neurological disorders, EMS is not for you. Otherwise, she says, she can customize a routine for anyone at any age, charging about $60 per session.

“I have a client who is 84 years old,” said Mirzanejad.

The 20-minute workout wraps with a five-minute relaxation routine with stretches. She recommends people get three days of rest before coming back in for another workout.