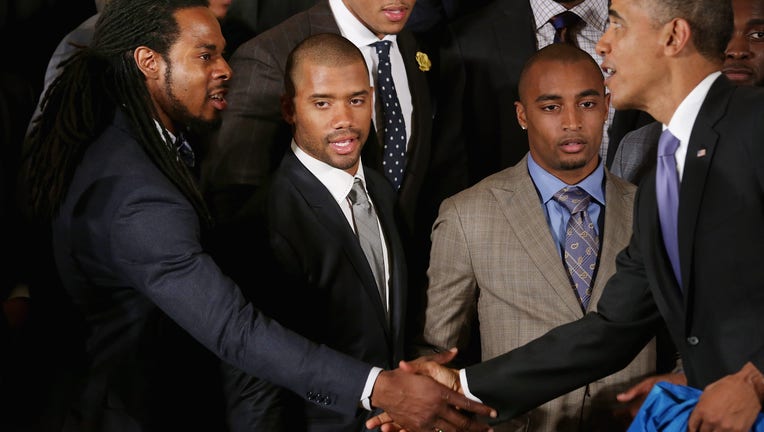 THE PRESIDENT:  All right, everybody have a seat.  Welcome to the White House.  (Applause.)  Let’s give it up for this quiet, reserved bunch called the Seattle Seahawks.  (Applause.)  World champions.  Best football team in America.  (Applause.)  I considered letting Sherman up here to the podium today -- (laughter) -- giving him the mic, but we’ve got to go in a little bit.  (Laughter.)

Obviously we’ve got some big Seahawks fans here today.  (Applause.)  That includes -- I know there are some members of Congress here who are huge Seahawks fans.  We’ve also got the Secretary of Interior, Sally Jewell, who is a big Seahawks fan.  (Applause.)  We’ve got Seattle Mayor Ed Murray in the house, a big Seahawks fan.  (Applause.)  I want to congratulate Coach Pete Carroll for his outstanding leadership.  I think those of us who are in leadership positions across disciplines, we’re always looking at folks who do things the right way.  I think it’s pretty clear that Coach Carroll does things the right way and we’re very proud of him.  Seahawks owner Paul Allen, who has done a great job, congratulations to him.  (Applause.)  We’ve got General Manager John Schneider who put together this outstanding organization, but I’m curious where the championship belt is today, John.  (Laughter.)

We are here to celebrate the first Super Bowl victory for the city of Seattle.  (Applause.)  During the regular season, the Seahawks tied for the best record.  Suffocating defense led to -- led the league in points allowed, yards allowed, interceptions, takeaways, turnover margin.  They beat the rival 49ers -- (applause) -- I knew you guys would clap on that one -- (laughter) -- in the NFC Championship game, and then dominated one of the best offenses in the NFL, beating the Broncos by 35 points.  (Applause.)

Of course, I don’t need to tell you how outstanding the Seahawks are because they did a pretty good job of describing themselves as outstanding during the year.  (Applause.)  You may have heard about the Legion of Boom -- (laughter) --  Richard Sherman, and Earl Thomas, and Kam Chancellor, and Byron Maxwell, who combined to form the best secondary in football.   You had a dominating defensive line with guys like Michael Bennett and Red Bryant, Brandon Mebane -– and Brandon Mebane’s belly roll dance -- (laughter) -- all combining to -- we can’t do that here in the White House.  (Laughter.)

And then there’s Russell Wilson, who you may not recognize because his locks are shorn -- he has cut his hair.  (Laughter.)  Where is Russell?  There he is.  (Applause.)  I was telling him he looks okay this way too.  He doesn’t have a peanut head or anything.  (Laughter.)

So Russell has won more games through his first two seasons than any quarterback in history.  (Applause.)  He also became only the second African American quarterback ever to win a Super Bowl.  And the best part about it is nobody commented on it, which tells you the progress that we’ve made, although we’ve got more progress to make.  (Applause.)

And part of the reason that I think Russell inspired a lot of folks is he’s been proving the doubters wrong for a very long time.  For years, folks said he’d be too short to succeed as a quarterback in the NFL.  Five quarterbacks were drafted ahead of him, which is a familiar story for a lot of these Seahawks.  You got three starters in the secondary who were taken fifth round or lower.  Nineteen players on the roster weren’t drafted at all.  Last year, a pundit had the gall to call the receiving corps “pedestrian,” which I heard made “Angry Doug Baldwin” even angrier.  (Laughter.)

So let me just say as a guy who was elected President named Barack Obama, I root for the underdogs.  (Applause.)  And so seeing folks overcome the odds excites me.  But it also excites me when you see the whole being greater than the sum of its parts.  And that’s what team is all about.  And this is a team.

And it’s not just about football.  These guys have been overcoming adversity off the field as well.  They’ve got fullback Derrick Coleman, who has been legally deaf since he was three years old.  I joke about Richard Sherman, but he grew up in Compton amid some wonderful people, but also gangs and drugs and guns.  His dad had to wake up before 4 a.m. every day to drive a garbage truck.  But because of his dad’s hard work and his family, and his mom, Richard ended up earning a 4.2 GPA in high school.  He won a scholarship to Stanford.  (Applause.)  He showed kids from his neighborhood that they could make it.  And if he seems a little brash, it’s because you’ve got to have attitude sometimes if you are going to overcome some of this adversity.  And the fact that he still goes back to inspire high schoolers for higher goals and making better choices, that’s all-star behavior.

And he’s not the only one giving back.  Russell spends every Tuesday -- even during the season -- visiting sick kids at the Seattle Children’s Hospital.  Coach Carroll’s “A Better Seattle” and “A Better LA” organization works to keep at-risk youth away from drugs and violence.  Paul Allen’s Family Foundation has given millions of dollars for medical research into traumatic brain injuries, which obviously is a concern in the NFL, but also is a concern to our troops and people all across the country.  As a team, the Seahawks raised more than $700,000 this year for causes like supporting our troops and strengthening our schools.

And that spirit of working hard and giving back has endeared this team to its fans in a way that most cities can’t replicate.  Now, part of it is you all have that stadium that is kind of cheating, because it’s so loud.  (Laughter.)  You hired some physicist to make it so.  (Laughter and applause.)  There are a lot of really smart people at Microsoft and up in those places that can design these things.  (Laughter.)

So we can’t talk about the Seahawks without talking about the 12th Man.  (Applause.)  Last season, “the 12s” set a record not once, but twice, for the loudest crowd noise in history.  (Laughter.)  Now, history is a long time, so that’s really loud.  (Laughter.)  So loud on multiple occasions, they’ve actually created minor earthquakes, which is disturbing.  And you should think about that.  (Laughter.)  After the Super Bowl, when they had the chance to celebrate, they let loose in true Seattle style.  And while some got a little carried away, there’s actually video of a huge group of Seahawks fans interrupting their celebration to wait for the walk sign before crossing an intersection.  (Laughter and applause.)  So that’s Seattle for you.  (Laughter.)