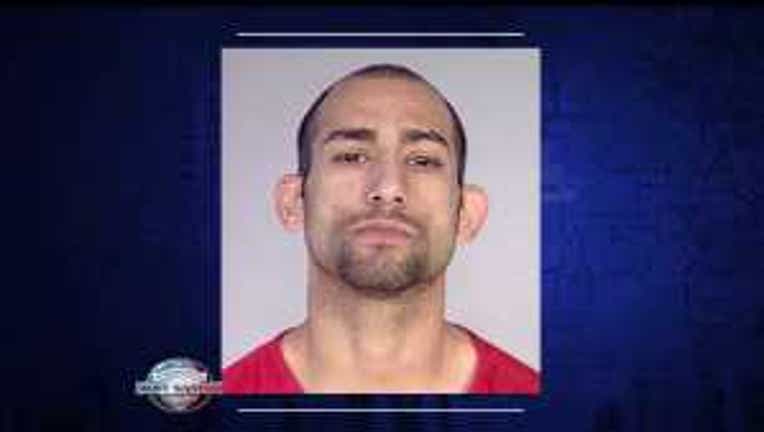 CAPTURED NOV. 14, 2012: The King County Sheriff's Office says on Wednesday, Steven Rich was arrested after running from deputies in Seatac. King County Dep. Jim Nelson and Dep. Ryan Abbott responded to a disturbance call in Seatac of a man yelling at woman. When they arrived, Steven “Gino” Rich took off running across all lanes of International Blvd S.  Deputy Nelson followed him, and he was almost hit by several cars.  When Rich jumped a fence to get away, Dep. Nelson followed and took him into custody. Deputies say Rich lied and told them he was  “Kevin Richards.” A portable fingerprint scanner took 30 seconds to give them his true identity.  Rich then admitted who he was, told them he’d seen himself on Washington’s Most Wanted and had been hiding out for the past few days at the airport. The mobile fingerprint scanners, like the one Dep. Abbott used to identify Rich, are funded by the Automated Fingerprint Identification System (AFIS) levy, which King County voters recently elected to renew.   FUGITIVE WANTED NOV. 13, 2012: It's heartbreaking to see: A frail woman clearly confused dragged from store to store and tricked into opening credit cards so three people could spend thousands on electronics. She even filled out credit applications as the suspects lingered around her. “I think it's absolutely despicable and disgusting,” said Aurore Cote, the woman’s caretaker.  “She’s obviously very frail, a sweet woman and take advantage of her like that is disgusting.” Because the woman has dementia, she couldn't tell Cote, her family or detectives who the three people were. She thought they were her there to help her. Instead detectives say they spent the night in her place and made her sleep on the couch.  Neighbors say they were cruel. “I heard angry voices, in her place and so I went over and banged on the door and I saw these three people in there,” neighbor Gerri Morgan said. After surveillance video from a store was broadcast, tipsters identified the three suspects as David Miller, who pleaded guilty to identity theft and got 33 months in prison, his sister, Tina Miller, who is facing the same charge, along with her husband, Steven Rich, who hasn’t shown up in court and now has a $20,000 warrant for his arrest. The victim is now safely living at a care facility.