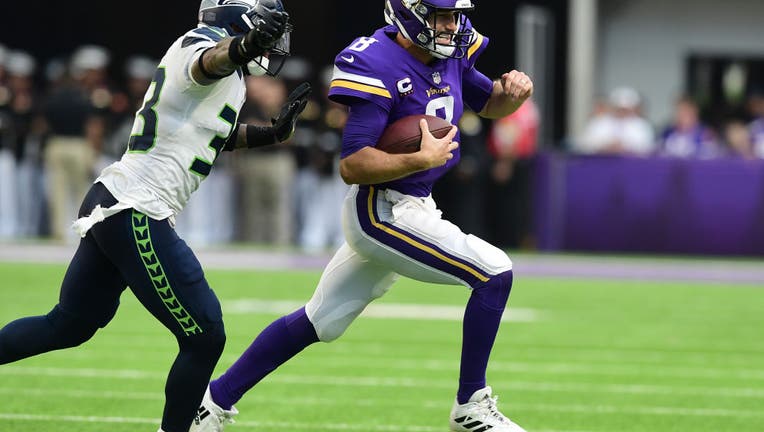 MINNEAPOLIS, MINNESOTA -- SEPTEMBER 26: Minnesota Vikings quarterback Kirk Cousins (8) is chased by Seattle Seahawks strong safety Jamal Adams (33) as scrambles for the sideline during the second quarter of an NFL football game at U.S. Bank Stadium i

RENTON, Wash. - Pete Carroll came away from team meetings this week feeling confident the severity of the situation facing the Seattle Seahawks is clear.

The Seahawks’ performances over the past two weeks have left players frustrated and they know two upcoming games against division foes within days of each other won’t leave much time for finding answers.

"I think, coming out of the meetings on Monday, showing the film, showing where the concerns were, the plays we could have made, and the decisions we could have made, everybody is tuned in," Carroll said. "We are trying to tune in forever, but I think there is a little bit of a different feel about it. They want to prove it; they want to prove that we are on the right track and that we are going to win a bunch of different games."

Seattle is in the midst of a two-game losing streak, a rarity while Carroll, Russell Wilson and Bobby Wagner have been running the show. Since Wilson and Wagner arrived in 2012, the Seahawks have never lost three straight games.

But the prospect exists if Seattle can’t solve some of its issues — specifically in the second half — with Sunday’s matchup at San Francisco. That’s followed by a quick turnaround to a Thursday home game against the Los Angeles Rams.

The concern for Seattle is that its problems aren’t isolated.

The Seahawks have not been able to make stops on defense over the past two weeks, especially in the second half. There were also clear execution breakdowns against the Vikings that left some in the Seahawks’ secondary confused about what they were supposed to be doing.

Wide receiver DK Metcalf said it’s been hard for the offense to find any rhythm in the second half.

"I know that we didn’t have the ball on offense long enough and then we kept putting the defense back on the field too fast," Metcalf said. "On offense we just have to execute and run the clock out."

The Seahawks placed tight end Gerald Everett on the reserve/COVID-19 list Wednesday, putting in doubt his availability for Sunday.

Seattle went through the entire 2020 season without a positive COVID case among its players. The Seahawks had a few players land on the COVID list as close contacts, but Everett’s is the first confirmed positive test of a player.

Everett tweeted "Be back soon," on Wednesday. Everett’s vaccination status is unknown but if he is vaccinated he could return with two negative tests 24 hours apart. Carroll said earlier this month that there were two unvaccinated players on the roster.

It could end up being a two-game absence for Everett with the Seahawks having a home game next Thursday.

Seattle designated TE Colby Parkinson (foot) and OL Cedric Ogbuehi (biceps) to return to practice after both spent the first three weeks on injured reserve. Seattle would need to make adjustments to the 53-man roster to have either available to play this week. Carroll said CB Tre Brown (knee) is probably another week away from returning.