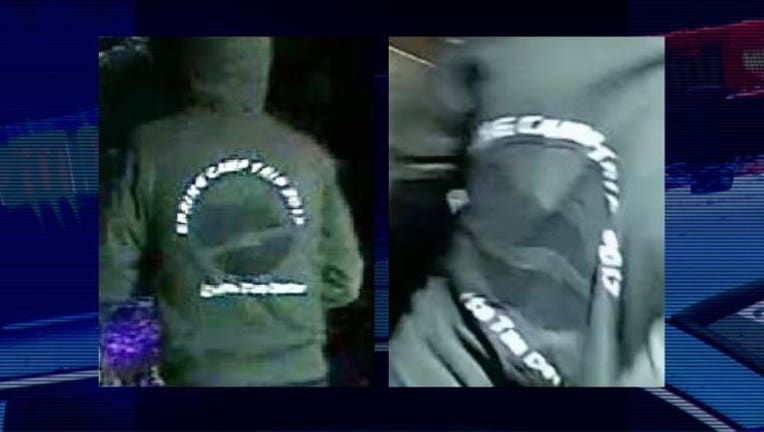 Surveillance video released by police on Wednesday shows the robbers first walking in the casino's parking lot at 2:51 a.m. and entering the casino a short time later.

Both suspects go directly to the cash window and demand all the $100 bills in the register, according to Kirkland Police. Video also shows a casino employee walk past them upon entering, but then gives a second look and notifies a security guard.

The video also shows a customer standing right next to the robbers as it was happening.

"The suspect in the green sweatshirt has some sort of nylon material that he’s using as a mask to cover his entire face, with the hood pulled up as well," said Detective Corporal Cody Mann of the Kirkland Police Department.

Video also shows the suspect in the black sweatshirt holding what appears to be a pistol, said police.

"They also brought with them two bags. They appear to be Gucci bags. From my understanding, when you buy Gucci products, they come in these dust bags. It's clearly labeled Gucci on these white bags. And that’s what they demanded the employee put the money inside," said Mann.

A major clue, however, comes from the suspect wearing the green sweatshirt. According to police the back of the sweatshirt says "Spring Camping Trip 2017" and on the bottom of it reads "Delta Tau Delta" fraternity.

Detectives were able to track down the sweatshirt maker. According to police, only 86 of those sweatshirts were made. They also said it's rare for fraternity members to share or let others wear their letters.

"That sweatshirt was made for a specific camping trip that was affiliated with the Delta Tau Delta chapter out of the University of Idaho back in 2017. We're not 100% sure that the suspect has any affiliation with that Greek chapter at all," said Mann.

Police said the robbery took only about 10 to 15 seconds. There wasn't any sign of a getaway car, said Mann. Police believe they headed in the direction of apartments next door, but they escaped before police got there.

"It’s likely they could've used a different road, gotten themselves into either Bothell or Woodinville rather than go back into Kirkland heading south. Or they may live in the area and they were able to make it back to their apartment or house," Detective Mann said.

Police are asking anybody who saw what happened, or perhaps are affiliated with the fraternity chapter, to give them a call.

You can also leave a tip with Crime Stoppers of Puget Sound at 1-800-222-TIPS or you can use the P3 Tips App on your smartphone. You can also submit anonymous tips at www.P3Tips.com. There is a cash reward of up to $1,000 for information leading to the arrest of these suspects.