FRANCE - France lifted most COVID-19 restrictions on Monday, abolishing the need to wear face masks in most settings and allowing people who aren’t vaccinated back into restaurants, sports arenas and other venues.

The move had been announced earlier this month by the French government based on assessments of the improving situation in hospitals and following weeks of a steady decline in infections. It comes less than a month before the first round of the presidential election scheduled on April 10.

Starting from Monday, people aren't required anymore to show proof of vaccination to enter places like restaurants and bars, cinemas, theaters, fairs and to use interregional transport. The so-called vaccine pass had taken effect at the end of January.

A restaurant owner in Paris, Laurent Negre, praised a "return to normal." 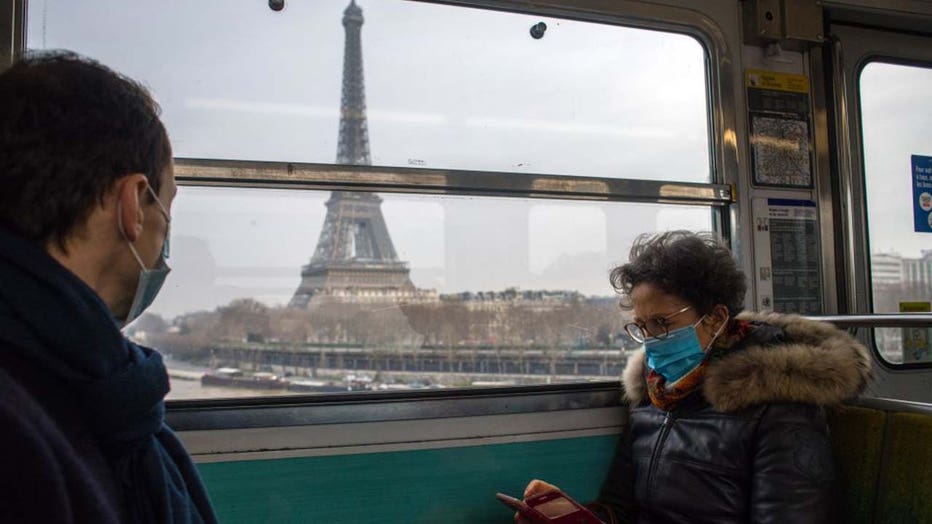 FILE - Passengers wear protective masks while travelling over the Bir Hakeim Bridge near the Eiffel Tower in Paris, France.

"We got used to these restrictions and complicated protocols so we will enjoy work more now ... So it’s good news," he said.

Parisian Bartholome Laisi, 23, said "it’s a good thing because people will be able to get more freedom of movement. But we need to be careful and monitor it, to avoid another (virus) wave right after."

In hospitals and nursing homes, unvaccinated people must provide a recent negative test or proof of recent recovery to enter.

Wearing masks are no longer required in schools, businesses and offices. They remain mandatory on public transportation and at hospitals and other health facilities.

Jocelyne Muller, living near Paris, was still wearing her mask Monday in the streets of the French capital as she was just getting out of the suburban train.

"It’s a relief" to be able to remove it "even though the mask does not bother me particularly," she said. "Now we just hope that it will bring back people in the cinemas, theaters and all artistic places."

More than 92% of people age 12 and older are fully vaccinated in France, which has a population of 67 million.

Oleg Cetinic contributed to the story.