The Seattle Seahawks have officially released their 2022 regular season schedule, and their first matchup is against the Denver Broncos—where former Hawks franchise quarterback Russell Wilson now calls home. We are proud to announce that, as always, the majority of the Seahawks' regular season games will be right here on FOX 13.

SEATTLE - FOX 13 will televise the Seattle Seahawks' second preseason game against the Chicago Bears, in addition to the 13 regular-season games scheduled to be broadcast on our station.

The game against the Bears is one of three preseason games, which takes place on Thursday, Aug. 18. It's also the only home game of the preseason.

See the full regular-season schedule below: 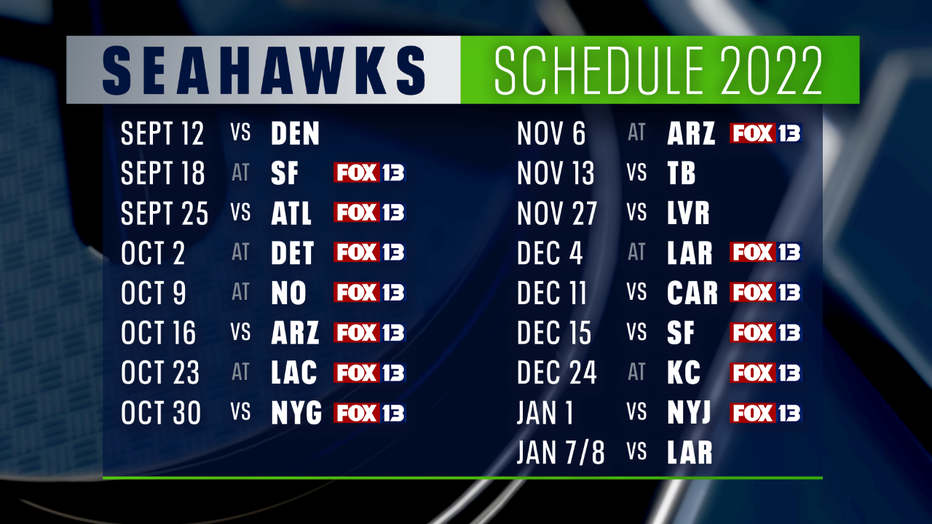 The Seahawks are traveling to Munich, Germany for a game against the Tampa Bay Buccaneers on Nov. 13. The game is a Buccaneers home game and will be the second time Seattle has played a regular season game internationally. The Seahawks beat the Oakland Raiders 27-3 at Wembley Stadium in London in 2018. Seattle will get its bye week the following week at they return home.

During the 17-week regular season, FOX 13 will air 13 Seahawks games, because FOX is the home television network for the NFC. FOX 13 will also air a full lineup of local Seahawks programming this fall that includes live pre-game and post-game coverage and Blue Friday celebrations on "Good Day Seattle."