SEATTLE -- Four new measles cases have been diagnosed in King, Pierce and Snohomish counties, and all four of the people who contracted measles spent time at Sea-Tac Airport.

According to the state Department of Health, there are two new cases in King County and one each in Snohomish and Pierce counties. Pierce County has two total cases so far this year, while King County has three and Snohomish has one.

One case in King County was confirmed to be at Issaquah High School, according to the school district. And the Snohomish County case involved a student or staff member of North Creek High School, the Northshore School District said.

Issaquah High School will be closed Thursday, May 15 so staff members can be checked for immunization records.

A letter from the school sent to parents reads, in part:

Public Health of Seattle and King County has advised us this evening that we need to verify the immunization status of all staff. Our staff needs time to obtain their records and share them with administrators.

Both school districts are encouraging parents to monitor their children for any symptoms. 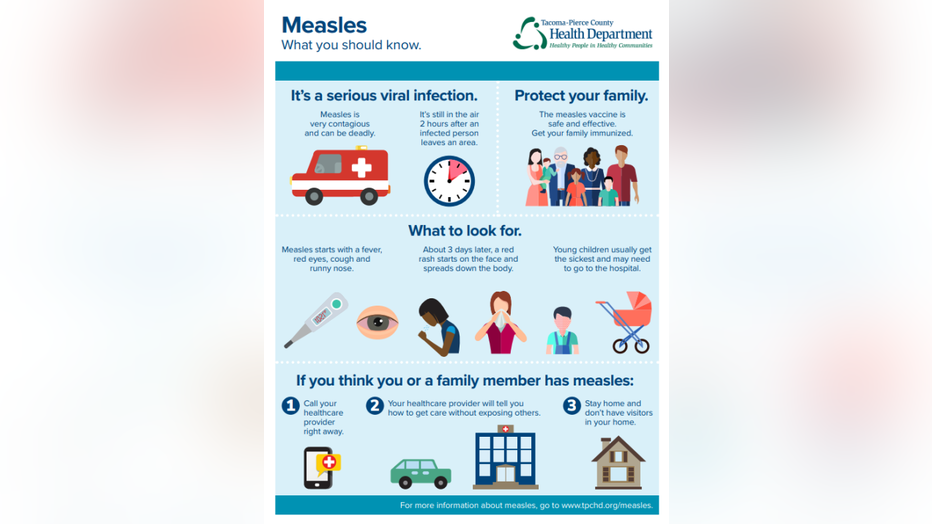 Officials said they don't have a comprehensive list of possible exposure locations, but all four of the people who have been diagnosed were at Sea-Tac Airport when they were exposed or infected.

One case in Pierce County is a man in his 40s who spent time in both Pierce and King counties while he was exposed. Here's his location list:

As of Wednesday (May 15), there were 77 measles cases in Washington state so far this year. The vast majority of those were in Clark County in southwestern Washington, where there was a sizable outbreak. The outbreak ended in late April.

According to the state health department, measles is highly contagious and can be serious. Measles is easily spread when an infected person breathes, coughs, or sneezes. Almost everyone who has not had the vaccine or measles previously will get measles if they are exposed to the measles virus.