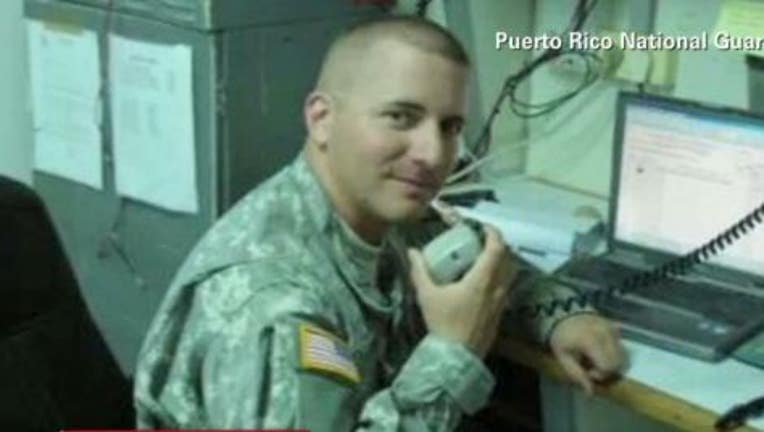 Army Spec. Ivan Lopez killed three soldiers and injured 16 others at Fort Hood, Texas, on Wednesday. He then killed himself.

By Richard A. Serrano, Adolfo Flores and Molly Hennessy-Fiske

When Army Spec. Ivan Lopez went on the shooting rampage Wednesday at Fort Hood, Texas, killing three soldiers and injuring 16 others, he had just learned that superiors had rejected his request to take a temporary leave to deal with family matters related to his mother’s death, a federal law enforcement official said.

Officials had turned down an earlier leave request and Lopez was attempting to renew it, said the official, speaking anonymously because the investigation is ongoing.

The rejection, delivered Wednesday, set him off, the official said.

“He had put in for something regarding his mother's death and some other matters, and it was denied,” the official said. “Or it wasn't going to happen as quickly as he wanted it to.

“When they told him, he blew his top,” the official said.

Lt. Gen. Mark Milley said Friday that the "direct precipitating factor" in the bloodshed was an "escalating argument within his unit area," not Lopez's mental health problems. He did not say what the argument was about.

Lopez was being treated for anxiety and depression and was under evaluation for post traumatic stress disorder, officials have said.

Chris Grey, a spokesman for the U.S. Army Criminal Investigation Command, said Lopez had been involved in a "verbal altercation" just before he opened fire with a .45-caliber semi-automatic pistol he had bought in March.

He said Lopez began shooting at the intersection of 72nd Street and Tank Destroyer Boulevard on the Army base. He entered a building firing indiscriminately, then drove to another, shooting along the way. Grey said investigators were scouring three crime scenes in the buildings and three outdoors, in an area the size of two city blocks.

Lopez killed three soldiers and wounded 16 before he came upon a military police officer, Grey said. He pulled his gun out and she fired one shot at him. "We do not believe the shooter was struck," Grey said. Lopez then fatally shot himself in the head.

Grey said they were still looking for a motive, but they may never have one.

One of Lopez’s neighbors, Mahogany Jones, 21, said he had complained to her two weeks ago that the Army was not taking care of soldiers.

He said being a soldier was not worth the benefits and that he was getting out in a year or so.

“He said don't join the Army because they're not giving people what they need,” Jones said.

He told her he had been stationed at Fort Bliss, Texas, and Jones said she asked him why he moved. She said he told her “it was too stressful.”

Lopez told her he had gone to Iraq, and that while he was there, he had seen three people die.

“He said he had trouble sleeping” after that, Jones said.

Lopez’s mother died in November, and the soldier was upset that Army officials granted him less than two days to go home to Puerto Rico for the funeral. Carmen Lopez's death from a heart attack came just a month after that of his grandfather.

Months later, the 34-year-old musician, father and decorated soldier posted a chilling message on his Facebook page saying that said he had been robbed, and that the devil had taken him and he was “full of hatred.”

Lopez's father said Friday that he was dismayed and surprised by his son’s actions. He described him as a calm, hard-working family man.

“My son could not be in his right mind; he wasn’t like this,” his father, also named Ivan Lopez, said in a statement. “I ask for prayers for all of the affected families, especially when there is an investigation underway.”

His son had worked as a police officer in Puerto Rico, Lopez said. He also said his son was undergoing medical treatment. The family deaths and changes because of a recent move to Ft. Hood probably affected his state of mind, Lopez said.

On Thursday, portraits of the slain soldiers' lives began to emerge from family and friends.

Ferguson, whose hometown is Mulberry, Fla., was shot as he held shut an unlocked door to protect a room full of military personnel, his fiance, Kristen Haley, said in a interview with WTSP-10 in Tampa Bay, Fla.

“If he was not being the one against the door, holding it,” Haley said, “that shooter would’ve been able to get through and shoot everyone else.”

He entered the Army in 1993 and was promoted to sergeant first class in 2004. He had done tours of duty in Afghanistan, Iraq and Kuwait, and was serving as a transportation management coordinator.

“I know that he did have pleasure of serving," Haley said. “This was his life. He was proud to be part of a great service.”

Owens, who was born in Effingham, Ill., and later moved to Missouri, died after being shot at close range, said Darlene “Dee” Humphrey, the stepmother of Owens’ wife, Billy.

“He was a wonderful, wonderful person,” Humphrey said. “Just kind and helpful, and very, very respectful.”

His mother told WGN News that she tried to call her son immediately after the shooting. "I left a message on his phone: 'Son, call me son so I know if you're OK,'” she said.

When she didn't get a call back, she said she thought, “Oh God please don't let it be.”

Four of the injured remained at Scott & White Memorial Hospital, the hospital said Friday. One patient is in good condition and probably will be discharged today. Five people had been discharged as of Friday morning.