Former Washington State University football coach Mike Leach has died after a brief hospitalization, according to the official website of Mississippi State Athletics.

On Dec. 11, Leach was airlifted to the University of Mississippi Medical Center, about 125 miles from the Mississippi State campus, where he is currently the head football coach.

Representatives for Leach said he was hospitalized for a ‘personal health issue.’

Officials with Mississippi State Football said he was in critical condition on Dec. 12. Leach acknowledged a bout with pneumonia late in the football season that was causing a persistent cough, but it was unclear whether his recent illness was related to this latest ailment.

The Leach family released a statement on Tuesday:

"Mike was a giving and attentive husband, father and grandfather. He was able to participate in organ donation at UMMC as a final act of charity. We are supported and uplifted by the outpouring of love and prayers from family, friends, Mississippi State University, the hospital staff, and football fans around the world.  Thank you for sharing in the joy of our beloved husband and father's life."

Leach was in his third season at Mississippi State, with a 19-17 record. Leach, known for his prolific Air Raid offenses, is 158-107 in 21 seasons as a head coach at Texas Tech, Washington State and Mississippi State.

News of him falling gravely ill swept through college football the past few days and left many who knew him stunned, hoping and praying for Leach’s recovery under grim circumstances.

His impact on all levels of football — from high school to the NFL — over the last two decades runs deep and will continue for years to come.

"Mike’s keen intellect and unvarnished candor made him one of the nation’s true coaching legends," Mississippi State President Mark Keenum said. "His passing brings great sadness to our university, to the Southeastern Conference, and to all who loved college football. I will miss Mike’s profound curiosity, his honesty, and his wide-open approach to pursuing excellence in all things."

An interview with Leach was as likely to veer off into politics, wedding planning or hypothetical mascot fights as it was to stick to football. He considered Donald Trump a friend before the billionaire businessman ran for president and then campaigned for him in 2016.

He traveled all over the world and his curiosity knew no bounds. He most appreciated those who stepped outside of their expertise.

"One of the biggest things I admire about Michael Jordan, he got condemned a lot for playing baseball. I completely admired that," Leach told The Associated Press last spring. "I mean, you’re gonna be dead in 100 years anyway. You’ve mastered basketball and you’re gonna go try to master something else, and stick your neck out and you’re not afraid to do it, and know that a lot of people are gonna be watching you while you do it. I thought it was awesome." 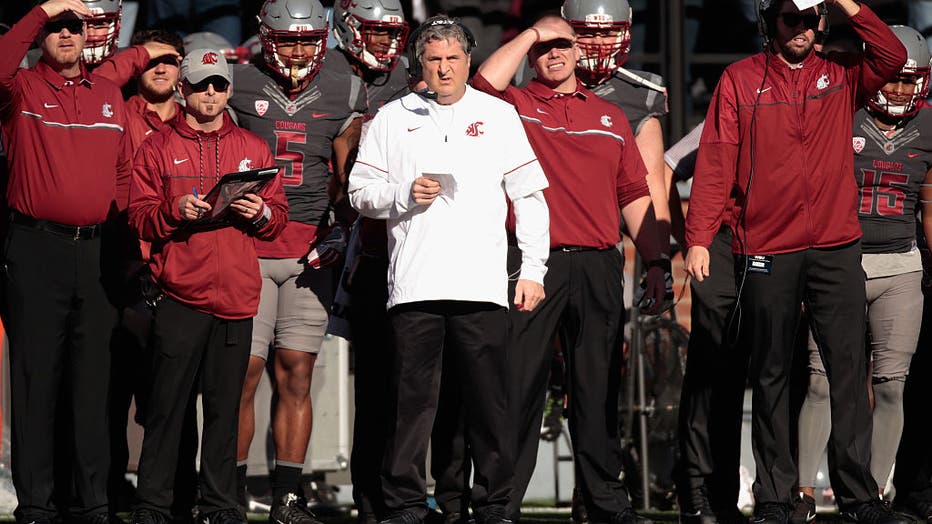 PULLMAN, WA - NOVEMBER 05: Head coach Mike Leach of the Washington State Cougars looks on from the sidelines during the game against the Arizona Wildcats at Martin Stadium on November 5, 2016 in Pullman, Washington. Washington State defeated Arizona

Leach began coaching the Cougs in 2012 after coming from Texas Tech University, where he "became the winningest coach in Texas Tech history" during his time there from 2000-2009.

In his first season at Washington State University, Leach's offense led the Pac-12 in passing, averaging 330.4 yards per game, which was the second-highest average in the school's history.

In Leach's second season, he led WSU to the Gildan New Mexico Bowl – the first bowl game for the Cougars in a decade. He would go on to lead WSU to five bowl appearances in his seven years there.

Leach leaves behind a wife, four children and three grandchildren. He was the oldest of six siblings, according to his biography page on WSU's website.

The Associated Press contributed to his report.