ROCHESTER, N.Y. - A former Gig Harbor man and Weyerhaeuser executive has been convicted for the brutal ax-murder of his wife, which happened nearly four decades ago in upstate New York.

The couple had a 3-year-old daughter, Sara, at the time, and Krauseneck had been working at the Eastman Kodak Company in Rochester, New York, a city near the Canadian border.

According to an article from The Seattle Times, investigators came to Gig Harbor to speak with Krauseneck nearly seven years ago. At that time, Krauseneck was working as vice president of sales for Weyerhaueser, one of the world’s largest lumber companies that is headquartered in Seattle.

On the day of his sentencing, Sept. 26, 2022, Krauseneck was led away in handcuffs following the verdict. Being deemed a flight risk, he will be held until sentencing on Nov. 7 in front of New York State Supreme Court Justice Charles Schiano.

Krauseneck, who previously taught economics at Lynchburg College in Virginia, initially told police that when he arrived home from work on Feb. 19, 1982, he found the garage door open, glass on the floor and his wife dead with an ax sticking out of her head. Their daughter was unharmed in another room. 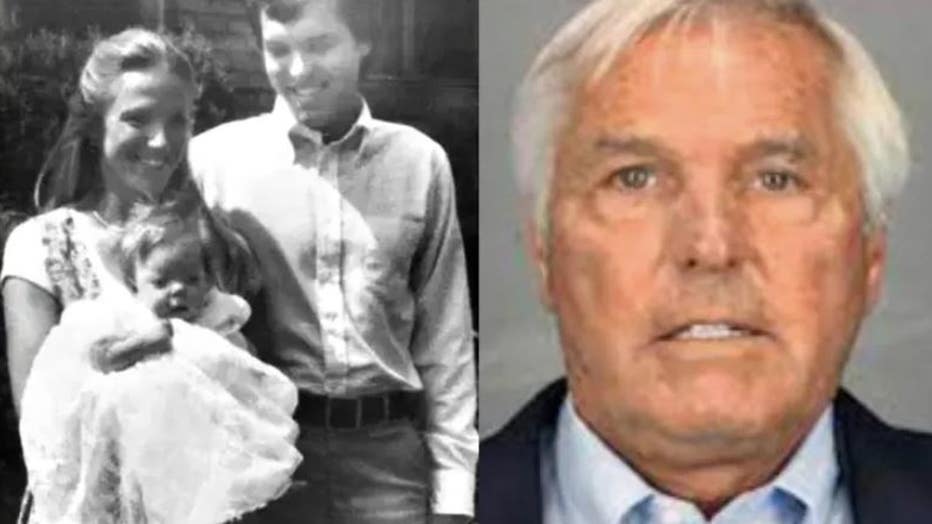 A combination of economist James Krauseneck's booking photo and a family portrait of his slain wife Cathleen Krauseneck and their daughter, Sara. Krauseneck's trial is underway for the alleged ax murder of his wife in 1982. (Facebook/Brighton Police

He went on to say he quickly grabbed his daughter and rushed next door. The neighbor later told police that Krauseneck had "a look of terror on his face" and seemed unable to speak, People magazine previously reported.

But investigators allege that his display of emotion was all an act. Police believe Krauseneck "drove an ax into [Cathleen's] head while she slept," according to Law&Crime. He then left for work, leaving his daughter alone with her mother's corpse the entire day.

The ax came from the couple's garage and had been wiped clean of fingerprints.

Krauseneck would go on to marry three more times before he was arrested at his vacation home in Arizona in 2019 for his first wife's murder.

A jury was selected for the cold case in September 2022.

Brighton Police Chief David Catholdi has previously said when they initially announced murder charges that detectives spent "thousands" of hours investigating yet never found any evidence that another person had been in the home.

"DNA, fingerprints — or the lack thereof — can speak volumes," Catholdi said at the time. "You would expect DNA evidence to be in that home. He lived there. What we did not find was any DNA that belonged to anybody else that was in that home. I think that speaks volumes."

FOX NEWS contributed to this story.