Former senator, Mike Enzi "passed away peacefully" while surrounded by his family, a statement read. Enzi’s family said he was admitted to UCHealth Medical Center of the Rockies in Loveland, Colorado after he was found unconscious. The former senator suffered from a broken neck and ribs, according to the family.

GILLETTE, Wyo. - Retired Sen. Mike Enzi, a Wyoming Republican known as a consensus-builder in an increasingly polarized Washington, has died. He was 77.

Enzi had been hospitalized with a broken neck and ribs three days after a bicycle accident near Gillette on Friday. He was stabilized before being flown to a hospital in Colorado but remained unconscious, D’Onofrio said.

Enzi fell near his home about 8:30 p.m. Friday, family friend John Daly said, around the time Gillette police received a report of a man lying unresponsive in a road near a bike.

Police have seen no indication that anybody else was nearby or involved in the accident, Lt. Brent Wasson told the newspaper.

A former shoe salesman first elected to the Senate in 1996, Enzi became known for emphasizing compromise over grandstanding and confrontation to get bills passed.

His "80-20 rule" called on colleagues to focus on the 80% of an issue where legislators tended to agree and discard the 20% where they didn’t.

"Nothing gets done when we’re just telling each other how wrong we are," Enzi said in his farewell address to the Senate in 2020. "Just ask yourself: Has anyone ever really changed your opinion by getting in your face and yelling at you or saying to you how wrong you are? Usually, that doesn’t change hearts or minds." 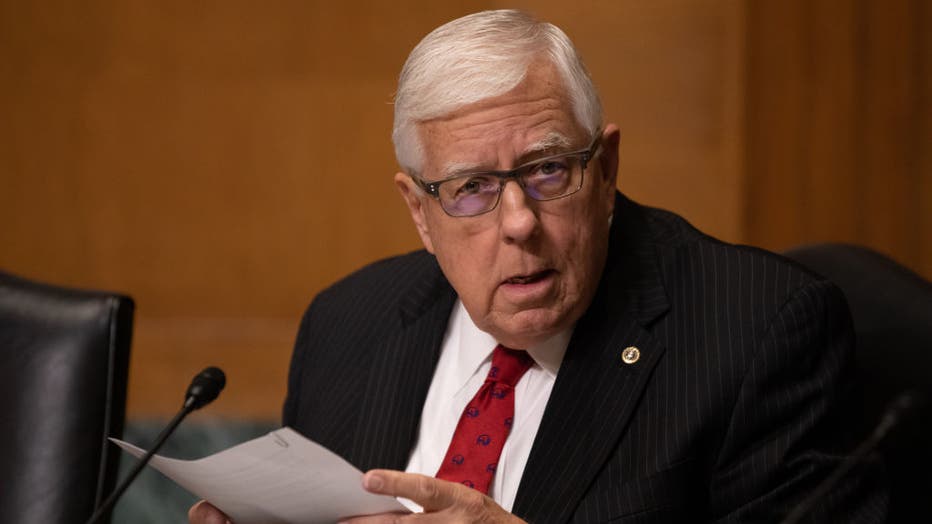 FILE - Senator Mike Enzi, R-Wyo., asks questions during a hearing held by the U.S. Senate Committee on Finance on Capitol Hill, on May 14, 2019. (Photo by Cheriss May/NurPhoto via Getty Images)

Wyoming voters reelected Enzi by wide margins three times before he announced in 2019 that he would not seek a fifth term. Enzi was succeeded in the Senate in 2021 by Republican Cynthia Lummis, a former congresswoman and state treasurer.

Enzi’s political career began at 30 when he was elected mayor of Gillette, a city at the heart of Wyoming’s then-booming coal mining industry. He was elected to the Wyoming House in 1986 and state Senate in 1991.

The retirement of Republican Sen. Alan Simpson opened the way for Enzi’s election to the Senate. Enzi beat John Barrasso in a nine-way Republican primary and then-Democratic former Wyoming Secretary of State Kathy Karpan in the general election; Barrasso would be appointed to the Senate in 2007 after the death of Sen. Craig Thomas.

Enzi wielded quiet influence as the Senate slipped into partisan gridlock over the second half of his career there.

His more recent accomplishments included advancing legislation to enable sales taxes to be collected on internet sales crossing state lines. He played a major role in reforming the No Child Left Behind law that set performance standards for elementary, middle and high school students.

He fought for Wyoming as the top coal-mining state to receive payments through the federal Abandoned Mine Land program, which taxes coal operations to help reclaim abandoned mining properties.

Enzi sought to encourage business innovation by hosting an annual inventors conference. He also backed bills involving the U.S. Mint but his proposal to do away with the penny was unsuccessful.

Enzi was born on Feb. 1, 1944, in Bremerton, Washington. His family moved to Thermopolis soon after.

Enzi graduated from Sheridan High School in 1962 and from George Washington University with a degree in accounting in 1966. He received a master’s in retail marketing from the University of Denver in 1968.

He married Diana Buckley in 1969 and the couple moved to Gillette where they started a shoe store, NZ Shoes. They later opened two more NZ Shoes stores, in Sheridan and Miles City, Montana.

From 1985 to 1997, Enzi worked for Dunbar Well Service in Gillette, where he was an accounting manager, computer programmer and safety trainer.

Enzi served two, four-year terms as mayor of Gillette. He served on the U.S. Department of Interior Coal Advisory Committee from 1976 to 1979.

His family expressed appreciation for prayers and support they’ve received but asked for privacy, D’Onofrio said. The family is planning "a celebration of a life well-lived," he said in a statement and plans to share details later.

Enzi is survived by his wife; two daughters, Amy and Emily; a son, Brad; and several grandchildren.