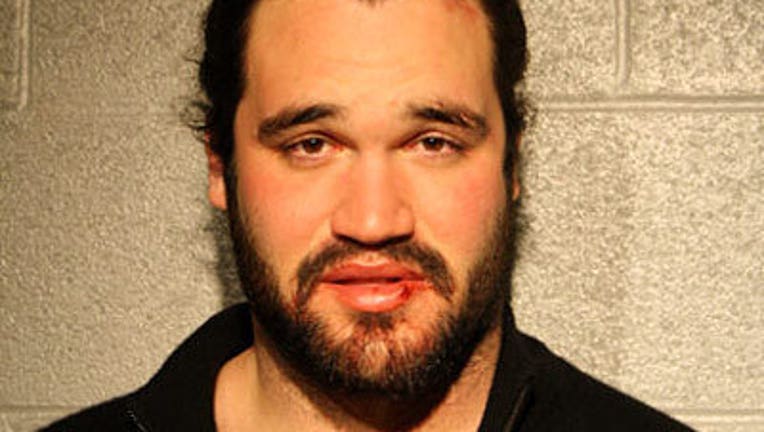 Former Seahawk player John Moffit at a Chicago nightclub. From the Chicago Tribune.

CHICAGO -- A former NFL football player who abruptly left the sport in November was arrested early Sunday after he allegedly punched another man at a Near North nightclub.

John Moffitt, 27, was drafted in 2011 and played offensive line for the Seattle Seahawks for two years, according to NFL.com, before being traded to the Denver Broncos last summer.

He left the NFL in November.

Moffitt was at The Underground nightclub in the 0-100 block of West Illinois Street early Sunday when a man questioned him about selling drugs in the club, according to Cook County court records.

Moffitt then “became combative” and struck the man in the head, according to court records.

The head blow did not require hospitalization, court records state.

Moffitt, whose home address is listed in court records as Renton, Wash., was searched and found with 10 grams of cannabis, four ecstasy pills and one gram of cocaine, according to court records.

He was charged with possession of a controlled substance and possession of between 15 and 100 grams of ecstasy, both felony charges.

He was ordered released on his own recognizance Sunday at Cook County Bond Court.

Moffitt made headlines last year when he retired from the Broncos, who went on to lose to his other former team, the Seahawks, at Super Bowl XLVIII in February.

The former All-American guard at the University of Wisconsin, who signed a four-year rookie deal worth nearly $3 million, said he quit the game because he was “just sick of playing football,” according to a January article in the Los Angeles Times.

Moffitt also said he was uncomfortable with the pedestal athletes are placed upon, as well as the potential for long-lasting injuries if he continued to play.

From the Chicago Tribune