The Nuremberg trials began on Nov. 20, 1945, in what is now seen as the birthplace of a new era of international law.

BERLIN - A former secretary for the SS commander of the Stutthof concentration camp skipped the planned start Thursday of her trial in Germany on more than 11,000 counts of accessory to murder, officials said. She was picked up several hours later after the court issued an arrest warrant.

The 96-year-old woman left her home near Hamburg in a taxi on Thursday morning, a few hours before proceedings were due to start at the state court in Itzehoe, court spokesperson Frederike Milhoffer said.

The court issued the warrant and delayed the reading of the indictment until the next scheduled hearing on Oct. 19 because that couldn't be done in the defendant's absence.

The accused woman previously had "announced that she didn't want to come" to court, but the statement did not provide sufficient grounds for detaining her ahead of the trial, Milhoffer said. Given the woman's age and condition, she had not been expected "actively to evade the trial," Milhoffer added.

The court said Thursday afternoon that the defendant had been caught and police would bring her to the court, German news agency dpa reported. A doctor was to examine whether she was fit to be jailed before the court decides whether or not to put her in custody. 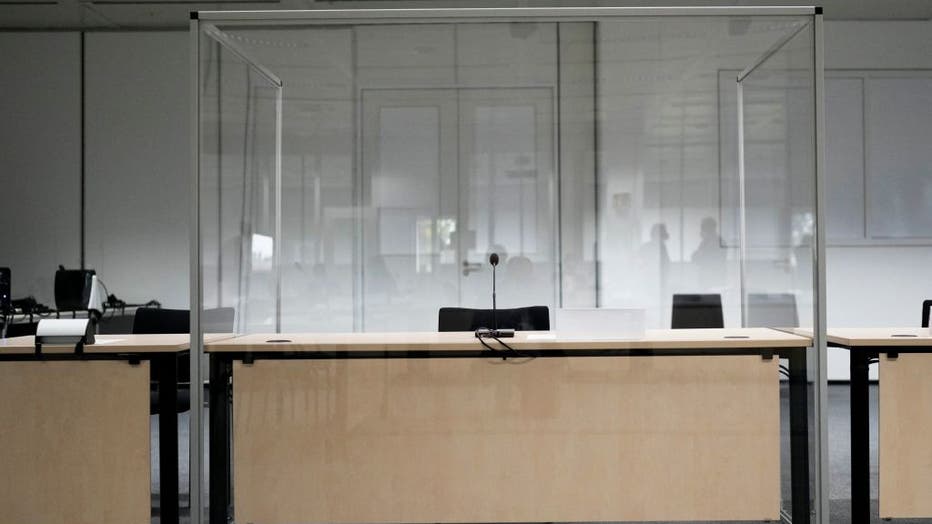 The empty seat of the defendant is seen at the courtroom prior to a trial against a 96-year-old former secretary for the SS commander of the Stutthof concentration camp at the courtroom in Itzehoe, northern Germany, on September 30, 2021.(Photo by MA

Prosecutors argue that the woman was part of the apparatus that helped the Nazi's Stutthof camp function during World War II more than 75 years ago.

The court said in a statement before the trial that the defendant allegedly "aided and abetted those in charge of the camp in the systematic killing of those imprisoned there between June 1943 and April 1945 in her function as a stenographer and typist in the camp commandant’s office."

Despite her advanced age, the German woman was to be tried in juvenile court because she was under 21 at the time of the alleged crimes. German media identified her as Irmgard Furchner.

Her flight, he added, "should also affect the punishment."

The case against Furchner relies on German legal precedent established in cases over the past decade that anyone who helped Nazi death camps and concentration camps function can be prosecuted as an accessory to the murders committed there, even without evidence of participation in a specific crime.

A defense lawyer told Der Spiegel magazine that the trial would center on whether the 96-year-old had knowledge of the atrocities that happened at the camp.

"My client worked in the midst of SS men who were experienced in violence — however, does that mean she shared their state of knowledge? That is not necessarily obvious," lawyer Wolf Molkentin said.

According to other media reports, Furchner was questioned as a witness during past Nazi trials and said at the time that the former SS commandant of Stutthof, Paul Werner Hoppe, dictated daily letters and radio messages to her.

Furchner testified she was not aware of the killings that occurred at the camp while she worked there, dpa reported.

Initially a collection point for Jews and non-Jewish Poles removed from Danzig — now the Polish city of Gdansk — Stutthof from about 1940 was used as a so-called "work education camp" where forced laborers, primarily Polish and Soviet citizens, were sent to serve sentences and often died.

From mid-1944, tens of thousands of Jews from ghettos in the Baltics and from Auschwitz filled the camp, along with thousands of Polish civilians swept up in the brutal Nazi suppression of the Warsaw uprising.

More than 60,000 people were killed there by being given lethal injections of gasoline or phenol directly to their hearts, or being shot or starved. Others were forced outside in winter without clothing until they died of exposure, or were put to death in a gas chamber.

Frank Jordans and Geir Moulson in Berlin contributed to this report.