CRYSTAL MOUNTAIN, Wash. – As you prepare for Memorial Day weekend, there’s another fun activity you can do with your family.  With a possibility of snow in the forecast, Crystal Mountain Ski Resort re-opened Friday.  It’s the first time they’ve re-opened for spring skiing since 2011.  You can ski Friday through Sunday from this weekend until June 21. 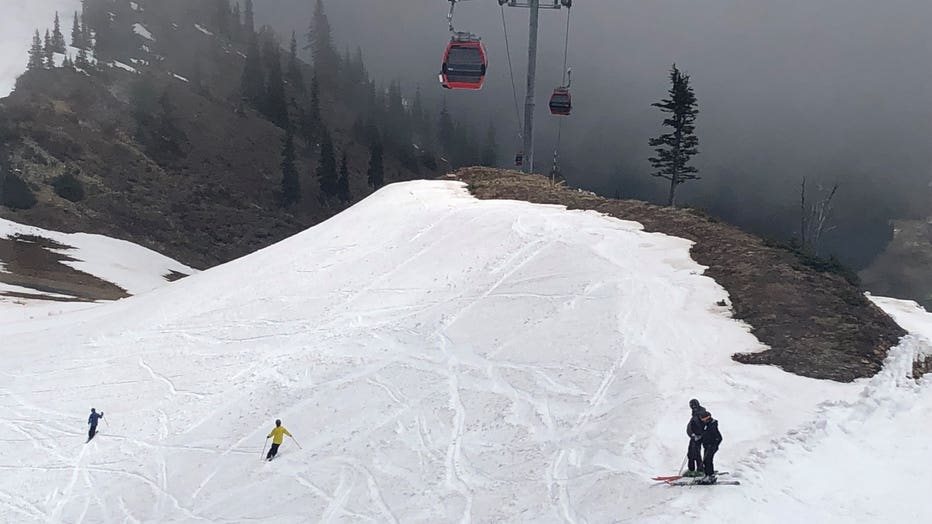 “It’s the only lift access skiing that you’re going to get in the Pacific Northwest,” said Crystal Mountain Marketing & Events Manager Brianna Stoutenburgh.

407 inches fell this season, which Stoutenburgh is about 85 percent of the annual snowfall.

“We held on really strong. We still have lots of snow.  Green valley is looking good but there are some dirt patches. So we’ve warned people bring up your rock skis,” said Stoutenburgh.

“Oh, you got to watch out for rocks cause it’s been melting,” said skier Laurie Aardal.

Aardal says despite the spring skiing challenges, she joined her husband on the mountain.

She’s not just skiing, but doubling up on fun this weekend.

“It’s the best of both worlds cause we’re going to go boating this weekend, but we decided to come up here today because there might not be as many people,” said Aardal.

“I’ll be on the water later on, snow now,” said Whitely.

Getting on the snow now is a no-brainer.

“It’s my own personal video game. Just freedom. You can go wherever you want on the mountain,” said Whitely.

With Mount Rainier just peaking out, you can’t beat the views.  And with half off lift tickets, it’s your last chance to play in the snow.

Even after the snow melts, you can still take a scenic gondola ride.  As the trails thaw out, Crystal Mountain will release details about summer hiking